Don't Miss Out on Henson Alternative's "Stuffed and Unstrung": Tickets Start at Just $30 for Patrons Under 30 Years Old 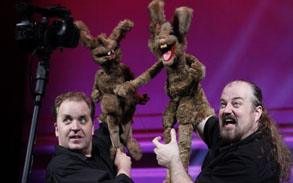 My online morning started with a lively Facebook debate with my cousin in Canada about whether a certain puppet was a Muppet animal or not: the eyebrows were different, the mouth was wrong, and isn't he red, not pink?

You see, there are the Muppets we know and love from our childhood, and then there are their "cousins," those that look sort of the same yet different.

Those puppets are Henson Alternative’s "Miskreant Puppets," created by the company over the years before the celebrity puppet world of Miss Piggy, Kermit, Gonzo and Elmo. The workshop that makes all these fuzzy bodies with a human soul has a whole company that works in TV commercials, movies and on TV shows (remember “Crank Yankers”?).

The company decided that a good way to train its performers was to teach them comedy improvisation skills, so they hired well-known TV actor Patrick Bristow to teach them how to roll with the action. What started as a creative workshop performance quickly became popular – it turns out people really love comedy, improvisation and puppets all in one. The idea of comedy improvisation being done by "non-humans" (sort of) seemed to open up a vibe that allows for an R-rated adult version of such child's play. Now, six years later, they are still taking the show on the road with “Stuffed and Unstrung,” an evening of musical numbers, comedy skits and audience interaction that make a pretty good end-of-the year party.

Bristow, who you may be familiar with from his many TV appearances as the quintessential man-child side kick on the groundbreaking sitcom “Ellen” as well as “Friends,” “Curb Your Enthusiasm,” a number of Disney Channel shows or in one of Hollywood's most popular stage shows right now, "How to Survive the Zombie Apocalypse," is the host of “Stuffed and Unstrung.” He keeps the skits on track and engages the audience in their creation. “Stuffed and Unstrung” offers adults a chance to indulge in their inner child.

"Puppets give everyone a freedom to push the envelope, even if that bad behavior is being created by an adult with a twisted sense of humor under the puppet,” said Bristow. “We don't set out to be smutty, but we have license for what the audience wants.”

This sort of subversive work is not so far fetched to those who know (or remember) Jim Henson's early career. With frequent appearances on “SNL” and “The Tonight Show,” Henson was always somewhat subversive; political topics and R-rated skits were the norm before the primetime Muppet era.

Today, under the director of Henson's son, Brian, the “Stuffed and Unstrung” show features performers from companies, including Groundlings Improv.

"They are great comics who have taken the time to learn how to puppeteer,” said Bristow. “It's a long process, like learning a musical instrument; it's a very disciplined art form."

The show has gotten rave reviews in London, New York City, San Francisco and in past L.A. shows at clubs like Largo and the Avalon. You may have also seen them with Cee Lo Green and Gwyneth Paltrow during last year's Grammys.

They are currently working on a film, but you can see them on stage in Irvine very soon.