Dial 'R' For Rejection: The Rejection Hotline Offers a Way to Let ‘Em Down Easy 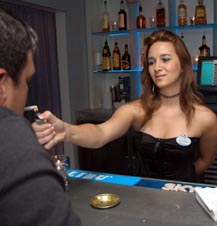 It’s an age-old mating ritual, not unlike a courtship ceremony you might see on the Discovery Channel.

The male species puffs out his chest, struts over to the female, fumbles through some conversation, perhaps buys her an Appletini, and, if all goes well, scores her cell-phone number.

After the respectable three days have passed (remember the movie Swingers?), the male calls the female. But if she has given him the number 407-970-8278, he is in for a rude surprise.

"You’ve reached the Rejection Hotline!" a cheerful voice says. "... Unfortunately, the person who gave you this number did not want you to have their real number." Then the voice rattles off a host of reasons for the rejection – arrogance, body odor, a "psycho-stalker vibe."

The man behind the voice, Jeff Goldblatt, originated the Rejection Hotline four years ago. He was at an Atlanta bar and observed a man flirting with an uninterested woman, who ultimately told the man to get away from her.

Even the man’s friends were laughing at him. There had to be a less humiliating way of rejecting someone, Goldblatt figured. So he recorded a Rejection Hotline message, first as a joke, but then word spread. Today, about 1.6 million callers dial the number each month, Goldblatt says. Local numbers are available for about 30 cities. Goldblatt, an MBA student at Emory University, also runs rejectionhotline.com, a site that makes a profit through advertisements, sponsorships and products for sale such as Rejection Hotline underwear.

Goldblatt estimates that 98 percent of callers dial for fun.

As for those who take it seriously, Goldblatt says, "We like to think it’s a public service." (By "we," Goldblatt is referring to himself and his tribe of unpaid interns.)

He says it’s a service to both sides, particularly the reject, who saves face instead of enduring a public rejection.

Nice it is not.

She adds that the hotline could dredge up painful memories, perhaps childhood traumas.

"There are classier ways to do a decline," Savage says.

John Fuhrman, author of Reject Me – I Love It! 21 Secrets for Turning Rejection into Direction, recommends offering a reason for rejecting someone. Constructive criticism, if you will.

You could tell a person, What I’m really looking for is X, and you are not that.

There’s always the cop-out, It’s not you, it’s me.

But when faced with a particularly obnoxious person, Fuhrman doesn’t rule out a direct, You know what, it is you.

"There is definitely a need for it [the hotline]," says Fuhrman, who is known in some circles as "Mr. Rejection". "If you’ve got someone you can’t shake off, absolutely, use the number."

Cox, a bartender at Universal Orlando’s CityWalk, once was pursued by a man wearing a shirt that read: Hi, You’ll Do.

He wouldn’t take the hint, so she gave him the number.

"I thought I would never see him again," Cox says.

She thought wrong. He came to the bar again and told her that giving the rejection number was really mean. It hurt his feelings.

And then he asked for her number again.