Who's a Pepper? In Waco, Everybody Is 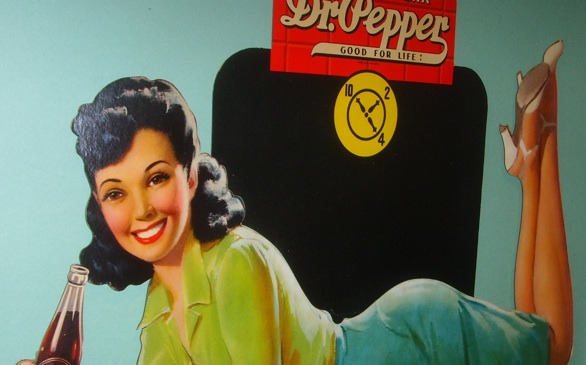 Coca-Cola was invented in Atlanta and Pepsi was originally concocted in North Carolina. But do you know where the deliciously non-cola Dr Pepper originated?

A young pharmacist named Charles Alderton in Waco, Texas dreamed up the unique-tasting soda pop in 1885, making Dr Pepper America’s oldest major-brand soft drink. It’s a mystery as to why Alderton called his drink Dr Pepper, but the doctor reference probably stems from the fact that Alderton wanted to make a drink that tasted sweet and syrupy, which was how he thought the drug store he worked in smelled because of all the medications.

All the other facts of the Dr Pepper story (except of course for the secret formula) reveal themselves at one of Waco’s top attractions, the Dr Pepper Museum. The museum has three floors packed with memorabilia, including a large collection of vintage signage and bottles, advertising items, coolers and vending machines and even a delivery truck from 1924. And the museum has two very unique features, one of which is that it is built right over one of the wells where spring water was at one time drawn to the surface and used in the making of Dr Pepper; the spring is dry now, but you can still peer down into the well.

Then there’s the grand finale --- the old fashion soda shop. Here you can have a cold glass of Dr Pepper like you’ve never had it before. The soda jerk will make you some very fresh pop old school by drizzling syrup into a glass and then carefully adding just the right amount of carbonated water, giving you a treat that’ll have you effervescing as you leave.  “I’m a Pepper, he’s a Pepper, she’s a Pepper…” Don’t worry about it, you won’t be the first one to leave the museum singing the brand’s silly but catchy jingle. drpeppermuseum.com

Speaking of catchy, another of Waco’s most popular attractions is all about a group of fellows who always catch their man. I’m talking about the legendary Texas Rangers and the homage to them found at the Texas Ranger Hall of Fame and Museum. There’s some serious stuff here, including an array of guns that the Rangers have used over the years along with some nasty armaments that they’ve taken away from bad guys. You’ll see all kinds of Ranger-related memorabilia like the western gear worn in the old days when vaunted lawmen like Manuel “Lone Wolf” Gonzaullas prowled Texas looking for outlaws. The Hollywood side of the Rangers is honored with displays devoted to memorabilia from the “Lone Ranger” and “Walker, Texas Ranger” television shows. The museum also has a special list of names for you to look at, but you don’t want to find your name on it; it’s the current list of the top 10 most wanted Texas fugitives. texasranger.org

Another place in Waco that makes the mind skip back to days long gone by is the Homestead Heritage Traditional Crafts Village. Homestead is an attraction for visitors, but it is also a thriving community where many of the residents work making items for the modern world in an old fashion way. In the blacksmith shop, you can watch as the blacksmith heats iron in a blazing fire box and then lays it on an anvil to be pounded into, not horseshoes, but fancy decorative items. Spinning wheels and looms are busy turning out yarns and materials for chic sweaters in the fiber crafts shop. They make all kinds of furniture in the woodworking shop, but they also turn out some amazing guitars. All of the above is done strictly by hand, no power tools, and it’s flowing water that causes the big wheels to turn in the grist mill where they grind grain into flour that’s coveted by the finest of Waco’s restaurants. Tour Homestead at your own pace, then visit the large gift shop where they sell a wide variety of items that were made on site. You can also have a lunch made from locally sourced foods at Café Homestead…but alas, they don’t have Dr Pepper. homesteadheritage.com

To plan your trip to Waco visit wacocvb.com