Alt-J Has Surprises In Store for U.S. Tour 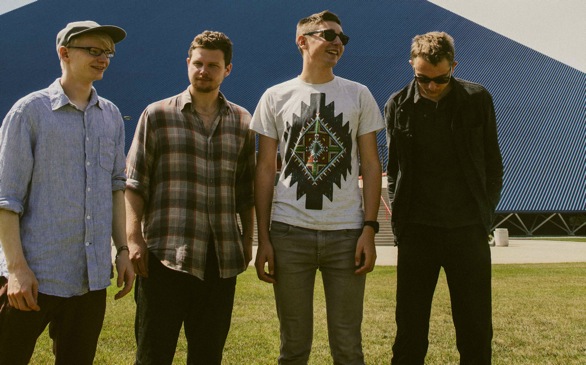 The guys of Alt-J finished touring in Europe. Next stop: the U.S.
(Credit: Jory Cordy)

Alt-J, made up of Joe Newman (guitar/vocals), Gwil Sainsbury (guitarist and bassist), Thom Green (drums) and Gus Unger-Hamilton (keyboards), formed after the members met at Leeds University in 2007. Earlier this week, Campus Circle was able to speak with Sainsbury as the band made its way through Europe while tour.

When I spoke with Sainsbury, the guys had just checked into their next hotel. He sounded happy about the tour and excited about where it would soon lead.

“We’re headed to Portugal after this and then, I believe, right on to the US. We have a 10-day tour there,” said Sainsbury. “Boston will be the first show, but then off to the west coast for the rest.”

This time around, the shows will be quite different. The band was not known for large productions, but with a bigger tour coming up some changes have been made to the show.

“These will be special shows,” said Sainsbury. “Usually when we do gigs, there isn’t any production. I don’t want to spoil it really, though. We have added to the production and possibly some special guests too.”

No need to spoil the surprise; the music on its own will be more than enough to get people to the show.
Alt-J’s eerie, rock sounding music and videos have a dark and offbeat undertone. When the band gets together to bring out new songs, the songs (at first) come from Newman.

“Joe [Newman] usually comes up with lyrics and a main melody with an acoustic guitar,” said Sainsbury. “Sometimes it will be just a riff, and we will all sort of restructure it and build it into the song.”

The band makes sure to keep everything relaxed during recording as well.

“It’s hard to keep it a relaxing environment when we record because we know how precious that time is,” said Sainsbury. “But we appreciate the happy accidents that can come out of it too. You can play a song hundreds of times, but then when you go to record, something that seems like a mistake can really be a great thing.”

He continued, “The spontaneity is important; we have to be open to the happy accidents in the studio. There has to be a little bit of messing around.”

Now on tour in support of its album An Awesome Wave, Alt-J will be touring the west coast of the U.S. for the rest of the year. Coming off of a successful European tour, there is little doubt that its U.S. tour will end in the same success. The album was released in May of 2012 in Europe and just recently in September in the states, with its one-of-a-kind videos also on release.

If you get a chance to see the guys of Alt-J, do not pass it up.

Alt-J will perform at the Fonda Theatre on Dec. 12.