Experience a Classic Holiday Show with 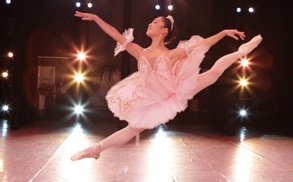 The students at the theatre have worked hard all year to put on
(Credit: Sharon Cavanagh)

Christmas is all about traditions, and everyone has their own. But one of America’s favorite Christmastime traditions is watching the world famous, classic ballet: “The Nutcracker.”

“The Nutcracker” ballet is based on the story The Nutcracker and the King of Mice, written by E.T.A Hoffmann in 1816. The story has been told over again and again, and many ballet companies and schools have performed their own versions of it. Now, the Marat Daukayev Ballet Theatre is performing its version from Dec. 14 to Dec. 16 at the Luckman Theatre at California State University – Los Angeles (Cal State L.A.).

For this production of "The Nutcracker," the theatre has decided to take a more traditional route. In this version, there's a young girl named Masha (other versions name her Clara) who gets a magical nutcracker for Christmas. When she falls asleep that night, the nutcracker comes to life as a prince. Masha and the Prince go on an epic adventure together, battling evil mice and traveling to a land filled with magical sweets. The ballet is colorful, elegant, beautiful and in every way magical.

“Marat is a purist. He was once in a performance of ‘Beauty and the Beast,’ where he had to take the story and cut it down to an hour,” said Pamela Daukayev, the executive director at the theatre and the wife of Marat Daukayev. “He told me that cutting every piece of the story was like cutting off an arm.”

“These children are getting the chance of a lifetime by getting to dance with Marat (who portrays Drosselmeyer, the mysterious magician-like figure in The Nutcracker), who would usually only be dancing with other stars,” said Pamela.

Marat Daukayev left the Kirov Ballet in St. Petersburg, Russia and came teach ballet in Los Angeles in 2001. This is where he met his wife, Pamela Daukayev, and they started The Marat Daukayev Ballet Theatre, which now has 120 children in it.

This ballet required a lot of dedication and effort. About 200-300 hours of work was put into “The Nutcracker,” but the children have been working all year; most of them dance every day.

According to Pamela, “The Nutcracker” is a way for these children to show how much they have improved, to be proud and to have fun in front of a live audience. However, not everyone can have a role in the ballet.

“The hardest part of making ‘The Nutcracker’ happen was the casting, and you want everyone to be happy,” said Pamela. “These children become like your own so you wish that you could just give them all parts. But like I told them, ‘The Nutcracker’ wouldn’t look very good if we had 100 sugarplums on stage.”

The tickets for the Nutcracker are $33. Audience members can expect to have a great time or as Pamela herself puts it: “It will be like being transported to a place of beauty…like going on vacation to a world outside of this world.”