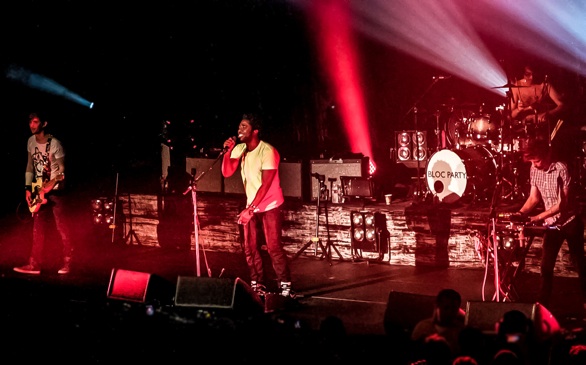 The guys of Bloc Party know how to party and energize their fans.
(Credit: Melissa Hebeler)

In less than a decade’s worth of time, there’s no secret what kind of stamp London post-punk outfit Bloc Party has left on the landscape of modern music.

As techno and house beats slowly unseated grungy guitar riffs in the late 1990s, there was a growing sentiment among the masses that rock ‘n’ roll and electronica weren’t right for each other.

That, of course, didn’t stop some from trying to marry the two aesthetics. Synthesizers and drum machines would subsequently find their way into mainstream rock songs, even if it sounded “uncool” to the majority of listeners at the time.

But by the mid-2000s, those jeers directed at up-and-coming electro-rock acts were finally being met with rounds of applause. And if there’s one band that can take much of the credit for igniting and popularizing such a post-millennium renaissance, it’s Bloc Party.

On Friday night at the Hollywood Palladium, hipsters in their late 20s and early 30s got to relive their impetuous college days as the British quartet returned to L.A. four months after headlining the first day of this year’s HARD Summer Music Festival.

The circumstances, however, were much different this time around.

There were no other artists competing for attention or time limitations to fuss over (HARD promoters only gave the band 60 minutes for its set on the festival’s main stage). Instead, this night would belong exclusively to Bloc Party and its most devout ensemble of fans.

For many of them, it’s been quite the wait. The band started touring again six months ago in support of Four, the aptly-named title of its fourth studio effort after a four-year hiatus that was filled with more than a handful of headlines.

The time apart, in fact, not only offered frontman Kele Okereke the freedom to release his first solo album, The Boxer, but also deal with his homosexual tendencies publicly. As the band’s lone black, non-straight member, he’s had to overcome his share of scrutiny, including rumors last year that he had left Bloc Party permanently.

At the Palladium though, Okereke and his sidekicks unleashed a fury on the dance floor as moshers pushed and shoved to classics like “Song for Clay (Disappear Here)” and “Banquet” from their first two albums.

Even “One More Chance,” the house-infused single the band released before taking a break, warranted praise from the audience as Okereke toed the edge of the stage and crooned at the top of his lungs.

Where Bloc Party unfortunately lost some of that fervor was on its newest material. While hit single “Octopus” flashed moments of ecstasy, particularly during lead ax man Russell Lissack’s AC/DC-like solo, other tracks such as “Real Talk” and “Coliseum” fell short of evoking such emotion.

Still, Okereke and company saved some of their best for last in a four-song encore that was highlighted by the pulsating, endearing “This Modern Love” and the spastic, metallic “Helicopter” off its 2005 debut success, Silent Alarm.

But the band wasn’t finished just yet, returning to the stage for a second encore that closed with “Flux” and paid tribute to pop star Rihanna and Scottish mega producer Calvin Harris for their work on “We Found Love.” The surprising intro triggered another jovial response from the crowd, and it quickly joined Okereke in reciting the tune’s bubbly opening lyrics.

It may have taken Bloc Party a few months to shake off the rust, but it definitely still knows how to party.