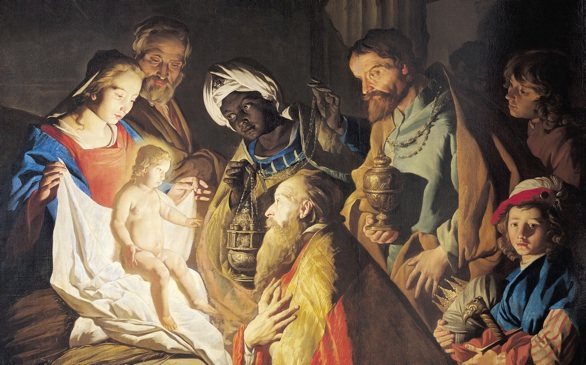 Spending an evening at the Los Angeles County Museum of Art (LACMA) is always a feast for the senses. Housed in the same area where the Tim Burton exhibit was previously held is Bodies and Shadows: Caravaggio and His Legacy. This exhibit presents the work of Michelangelo Merisi da Caravaggio (1571–1610), the brooding and enigmatic artist whose creations garnered him a popularity that rivaled both Michelangelo and Leonardo da Vinci.

Unlike most of Renaissance and Baroque art, which focused on adorned details and beauty, the Bodies and Shadows exhibit displays a different side of art that was present during its period. This exhibit showcases a number of Caravaggio’s pieces and other pieces by different artists from around the world who were inspired by his legacy. If you’re expecting sweeping landscapes and saintly portraits, you won’t find them here. Intrigue, however, will draw you in.

There is a profane beauty in the works on display. Portraits of brutal and powerful women with the heads of men on platters are a recurring theme in the legacy, for instance. The expressions are intensely presented, and you can discern the emotion in the jarring pieces.

Many of his commissions are of saints and of Jesus Christ, but what makes his pieces (and the ones inspired by him) stand out is that they are so unlike the representations we are used to seeing. There is almost something raw in his interpretation of saintly ecstasy and pain. It’s in the way the light draws focus on the shapes and eyes while having a blurred-out background. It’s the way the collection draws your attention and isolates a feeling rather than capturing a moment. It’s a bizarre sensation to have while taking in these images that are often unpleasant; you’re attracted to the sensory heightened in the emotion of the art.

Another one of the recurring images in Caravaggio’s work is that of Christ having the crown of thorns put on top of his head. The brutality pops out at you with the glint in his eyes and in the prosecutors’ expressions. Even just the detail of the thorns cutting into his skin is unsettling. What’s unique about these images is their ability to tap into your emotions, bringing out different reactions.

This exhibit will definitely make you feel things in an instant that you thought couldn’t be drawn out as quickly as they are. Like the light in some of the dark paintings that attracts the spectator, you could find yourself mirroring the wonder and taking part in the intimacy of the people congregated in these portraits.

The Caravaggio exhibit is definitely an experience unlike any other.

Bodies and Shadows: Caravaggio and His Legacy runs from now to Feb 10. For more information on museum details and ticket prices, visit lacma.org or call 323-857-6151.