Life is a Highway for On the Road Cast 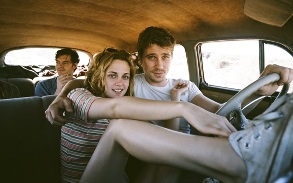 Talk about getting into character. Director Walter Salles and actor Garrett Hedlund, in prepping for the theatrical version of Jack Kerouac's beat classic On the Road, hopped into a classic car from that era and sped across the United States in search of a journey.

Well, "sped" was more like putted, and the "journey" turned out to be finding an auto body shop. The '49 Hudson broke down numerous times on desolate highways in the Southwest. There were so many fits and starts - just like the production of this film.

The movie, which also stars Kristen Stewart of Twilight fame, Sam Riley, Viggo Mortensen, Amy Adams, Kirsten Dunst and Elisabeth Moss, was percolating in the minds of numerous Hollywood players ever since Kerouac published the beloved work in 1957. (The novel itself went through a half-dozen reiterations, excising the names of the author's real-life cohorts such as Neal Cassady and Allen Ginsberg, typed on an epic, biblical scroll.)

The quest to find the right Dean Moriarty, that freewheeling Mephistopheles always looking for "kicks" character, concluded with a gripping audition by Hedlund. On board with the project since 2007, the star of TRON: Legacy was unafraid to go too far with the character, his pith best on display during the scene in a Mexican whorehouse in which Moriarty is crazily consumed with a mambo beat. He's perspiring, swirling and looking about ready to burst like a roman candle – as Kerouac eloquently put it in the novel. Hedlund's not playing Dean Moriarty; he is him in that moment.

"The yearning for adventure, especially for me growing up in such a small town in the middle of nowhere, [and] the desire to be away was incredible," Hedlund said of taking on the challenging role. "The yearning to live, be on your own and journey – these guys were able to do that."

Salles, known for his wanderlust masterpiece The Motorcycle Diaries, was the ultimate choice to helm this fabled work, approved by film-rights holder Francis Ford Coppola (after decades of shuffling writers and casts, with everyone from Marlon Brando to Brad Pitt to Coppola himself related to the production). Salles' keen understanding and embracing of "the imperfections of life," as the Brazilian auteur puts it, is what cemented his involvement.

One can see Salles' veneration for the piece in his realistic cinematography (with guidance from Eric Gautier, another The Motorcycle Diaries alumnus, manning a handheld camera). This being the story of explosive, curious 20-somethings in a post-WWII existence hitting the road to find their respective truths, the camera was apt in capturing that unstable hubbub. The nightclub scenes, set afire by Terrence Howard as jazzman Walter, were not only raucous but also tremulous, a certain intangible danger pulsing through the set.

Could that danger be in the form of Stewart's reinvention as a wild woman onscreen? As the vivacious Marylou, the audience's first glimpse of Stewart in On the Road is of her topless, languishing on husband Dean Moriarty's (Hedlund's) bed. This is no Bella Swan.

Stewart recognizes and respects that her fan base might cry foul on her newfound brashness, but she's aiming to grow as a thespian.

"The weight is lifted," she said of her Twilight days. "I don't have to worry about Bella anymore. But I'm like, wow… it's so weird. Where is it? She's not like tapping me on the shoulder anymore."

Salles added, "I think that [Stewart’s] such a mature and serious actress that although the character is very different than who she is, she understood everything in the logic of the character made sense."

The trials of Salles and screenwriter Jose Rivera ("Eerie, Indiana") figuring out what aspects to keep and which to dispose in the script were documented on camera – a sort of Hearts of Darkness: A Filmmaker's Apocalypse for this beatnik behemoth. For example, the grounded Remi, who temporarily reels in protagonist Sal Paradise from Dean's crazy clutches, is omitted from the movie. Salles surmises that doc will eventually see the light of day, as he's not signed on for any other movies at the moment.

The parallels between the proto-beatnik mentality of Sal, Dean and the gang and today's youth are fateful. In a way, today's college-age adults are part of a post-war generation, too— one that left many itching to get away from the Bush-era uncertainty of their adolescence.

"Within this time, there was such a sense of yearning for freedom and to get out," Hedlund said of the beats. "These guys were trying to explore all aspects of life when few were."

In striving for that unnamed "more," today's students still look to Mr. Moriarty and his surly crew as antiheroes. Sex, drugs and music (bebop then, raves now?) still fuel the fertile spirit, and fast cars remain the vehicles to get them there. Now, just as it was in the late 1940s, it's a mad world, and On the Road is sure to satiate and inspire that desire for freedom.

On the Road releases in theaters Dec. 21.

Special Features
‘There’s going to be no rules’: Hollywood tests new ways of releasing movies in a pandemic
491 views