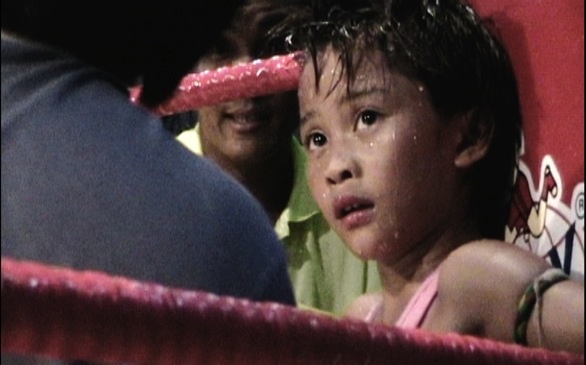 Buffalo Girls, directed by Todd Kellstein, brings awareness to the world of child boxing in Thailand, a country where seeing young girls spar is considered an entertaining pastime. This is where more than 30,000 young girls compete in underground child boxing.

This documentary follows the lives of two young girls, Stam and Pet, who work the underground child-boxing rings in rural Thailand. They are not your typical 8-year-old girls; both have their heads mostly shaved, hardened features and a determination fueled by the need to provide for their families. While audiences might not be able to imagine putting their youth through something as shocking as this, this documentary explains why child-boxing rings take place.

Stam and Pet come from severely impoverished families that have turned to child boxing for money. When asked why they were doing this, one of the little girls in the documentary answered with, “For money.” She had an almost shocked expression on her face, as if she was confounded by the idea that there would be any other reason to be a child boxer. It’s easy to see in Buffalo Girls that these children want to make sure that their families can survive.

Encouraged by their families, as well as strict trainers and the insane crowds that continue to feverishly bet on the outcome of these matches, Stam and Pet fight for prize money. However, what’s heartbreaking in this film is that they really do take a beating. Dressed in only Muay Thai shorts and shirts and without protection such as headgear or mouth guards, Stam and Pet suffer harrowing injuries. This is how they live, every fight hardening their spirits and pushing them to limits that most children don’t endure at such an early age.

What might be one of the hardest moments for audiences to watch is when Pet has severe stomach pains after a fight, and her family laughs it off because she has survived worse. These children break bones and injure body parts while in competition, but the demand for this sport is too strong for them to quit.

However, there are worse things these children could be doing and, for the most part, it’s their choice to box. There is no social welfare system like the one we have here in the U.S., and there is not that much aid. Unfortunately, this is the sad truth about many places around the world that live on the brink of starvation.

Buffalo Girls serves as a truthful and insightful reminder. We’re reminded that even children have to go to extreme lengths to provide for their families. There is still a long way to go in order to change worldwide social issues, especially when it comes to hunger and poverty.