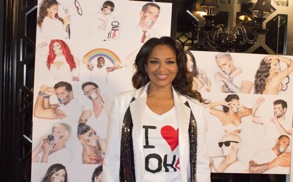 LisaRaye McCoy was one of the stars spotted at the red-carpet event.
(Credit: Kevin D. Robertson)

On Wednesday, Dec. 12, the NOH8 campaign held its fourth anniversary party at Avalon Hollywood, and Hollywood showed up to support.

After the red carpet, Rimes, Grey, Rogers, Kerli and DJ tyDi performed inside the venue.

Adam Bouska (co-founder of the NOH8 campaign) uses celebrity photographs to silently protest against the ban on same-sex marriage. Standing in front of a white background and wearing duct tape on their mouths and the logo "NOH8" on their cheeks, many celebrities have shown their support for same-sex marriage and the campaign. Now, the NOH8 campaign and its logo have become iconic in today's world, attracting the support from Hollywood and the civil rights movement.

Bouska and co-founder Jeff Parshley radiate energy when they talk about marriage equality. At the anniversary party, they were gushing about their own relationship and the excitement of the recent laws that passed across the country and in Mexico in support of same-sex marriage.

Though the event was far from a traditional protest, the message of the night was clear: Love and marriage do not recognize gender.