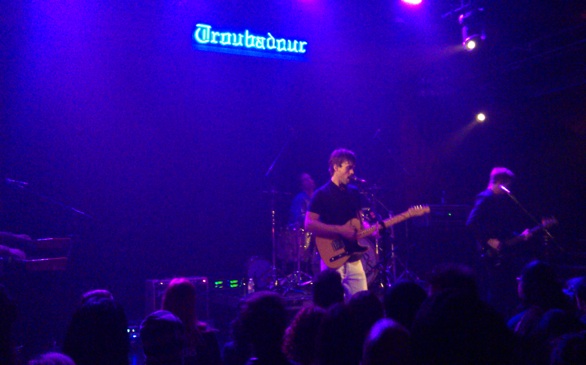 Atlas Genius fired up the crowd even though its set was short.
(Credit: Zach Bourque)

There must be something in the water down under. Australia has, without fail, churned out some of the most catchy, addictive indie pop/rock/electronic music bands over the past couple of years with apparent ease: Cut Copy, Empire of the Sun and now, Atlas Genius.

The two-plus, two-piece band, hailing from the quiet southern Australian city of Adelaide, has created immense buzz in the past months, well ahead of its full-length release. The band recently performed its hit single, “Trojans,” on “Jimmy Kimmel Live” and played a sold-out show at the Troubadour the night before.

Openers Blondfire warmed up the crowd with some catchy pop rock that never quite lit the stage on fire; its overproduced, glossy sound didn’t possess the energy needed to get anyone in the zone.  Even the band, which similarly has a new full-length coming out on Warner Bros. Records, seemed a bit bored up there. However, Blondfire, fronted by brother/sister duo Bruce and Erica Driscoll, certainly has the chops to make some catchy music; its hit single “Where The Kids Are” is not a lost cause.

But the Troubadour crowd lit up when Atlas Genius took to the stage. With only an EP to call its own at the moment, the kind of energy and love the band received before even strumming a note was fairly impressive. Fronted by Keith and Michael Jeffrey, the four-piece dived into a catchy, energetic set that had people moving and dancing in a way the opener couldn’t achieve, culminating in an explosive cover of The Strokes’ “Last Nite.”

Though the short set was indicative of the lack of material available, Atlas Genius made the most of it, firing through its catchy anthems, including “Back Seat” and “Symptoms,” before ending the performance “Trojans,” much to the young crowd’s appreciation.

At the end of the day, Atlas Genius is simply a tough band to hate, and we look forward to its full-length for more catchy Aussie pop.