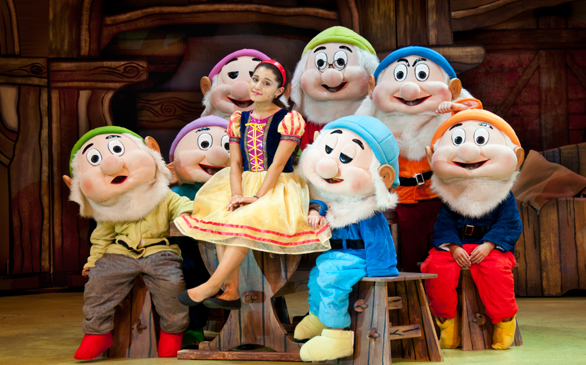 The Pasadena Playhouse has created quite an utterly entertaining show for the holidays. “A Snow White Christmas” stars emerging pop singer and Nickelodeon actress Ariana Grande as Snow White.

“This holiday season will be quite festive here at The Playhouse,” said artistic director Sheldon Epps in a prepared statement before the show’s opening night. “[It’s] largely due to this fantastically funny, musically delicious and engaging production that the Lythgoe family has delivered to our stage for families of all ages to enjoy.”

In this version, The Wicked Queen, who is Snow White’s aunt, sends a huntsman to kill the Princess, known to everyone as Snow White. Eventually, Snow White reaches the deep end of the forest and encounters the Seven Dwarves. They befriend and protect her up until she is facing death.

The play is an updated version of the classic tale since it reinvigorates the original mood of the story; it follows the traditional British family, Panto. By far one of the best pieces I’ve ever seen, this version includes a family-oriented setting from beginning to end. Numerous kids, colorful art within the stage’s background, jokes and music everyone will like are all included in this play.

“A Snow White Christmas” also features groovy dancing scenes to the beats of Michael Jackson’s “Thriller,” the News’ “Power of Love” and Psy’s “Gangnam Style." For example, an unknown kid busts out incredible moves while “Gangnam Style” loudly plays; his dance skills are remarkable, especially for his young age.

But that’s just part of it. All of the actors involved, from Grande to Neil Patrick Harris (The Magic Mirror), Charlene Tilton (The Wicked Queen), Curt Hansen (Prince Harry), Jonathan Scott Meza (Muddles, a clown-like entertaining character who is in love with Snow White) and David Figlioli (Herman the Huntsman), are beyond solid as they portray their characters.

While both Grande and Hansen added a somewhat sexy feel to the show, Meza stole the spotlight. He executed the role perfectly. Meza has the skill set to not only entertain on his own, but he is also able to capture the audience’s attention easily. One funny segment arrives when Muddles challenges the unknown kid in a dancing competition (the kid wins, of course).

Beacause of its unique depiction of the classic story, “A Snow White Christmas” is definitely the must-see theatrical piece this holiday season.