Kreayshawn is Not Your Typical Rapper 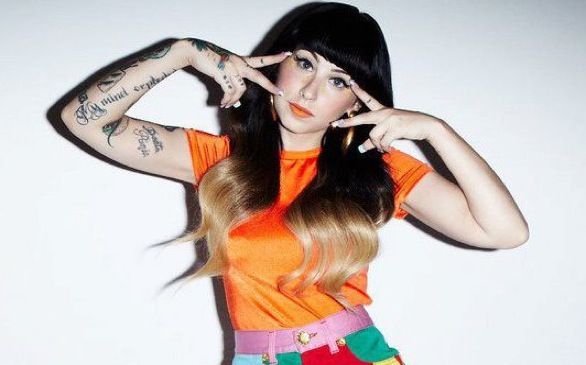 Bay Area rapper Kreayshawn may not look like your typical rapper, but she got her big break from her song “Gucci Gucci,” which has almost 40 million hits on YouTube.

Since then, she has signed with Columbia Records and released her album Somethin ‘Bout Kreay, which features appearances by Kid Cudi, Diplo and Sissy Nobby. Kreayshawn is currently finishing up her tour to promote her new album and is hoping to figure out what to do next.

In an interview with Campus Circle, she talked about her musical influences, the making of her latest album and touring.

Campus Circle: What made you want to be a rapper?
Kreayshawn: I don’t know. There wasn’t really a deciding moment. I’ve been making music since I was 10 years old and just having fun rapping over beats.

CC: Who are some of your influences?
K: I kind of just get influenced from anything; it doesn’t have to be somebody that I look up to. I like a lot of Bay Area music, and it really influences my style and what I talk about. I think seeing people like Gwen Stefani and No Doubt was an inspiration to me. I think a lot of women like Missy Elliot secretly inspired me back in my head.

CC: Your “Gucci Gucci” video now has more than 39 million views. How does it feel?
K: It’s so crazy because that’s a lot of freakin’ views, even for anybody - even for Justin Bieber. Getting 39 million views is a lot, especially for me. It is crazy to think that almost 40 million people have watched [the video] that many times because I don’t think that many people know who I am. It’s definitely interesting.

CC: How did the song come about?
K: It was kind of just random. It was one of my first times collaborating with other people to make music. Before, I would just steal beats off the Internet and rap over them. So, this is one of the first times I was collaborating with other people. It wasn’t really a conscious effort. We did the song, and a few month after that we did a music video, and a few months after that we released the video. It was really weird how it happened because there was no urgency. And for that song to basically get me a deal and change the Internet rap game…it was just weird how it was such a big impact. But when we were working on the song, it was just chill. How we treated it was really small, but it ended up really big.

CC: How has it been since you released your latest album?
K: It’s been interesting. For a long time, releasing an album was my duty. So now that it’s out, I did the tour, and the tour is about to be over. The tour was a really big deal and really fun, but now I’m kind of nervous because I don’t really know what happens next. Everyone is asking, “What are you going to do next? Are you working on your second album?” I’m just like: I don’t really know what to do next. Right now, I’m just trying to figure out what to do. I have all these weird, quirky ideas like YouTube things and making phone accessories; I have just a lot of ideas.

CC: What is your favorite song off of the album?
K: I don’t know because it changes. Especially now that I’m performing the songs, it’s different. I think for a while “BFF” was my favorite song just because it was really cheesy and a sing-a-long type of song. But it is a little awkward performing it, so I don’t know if that’ll be my choice of song anymore. “Twerkin” is fun because I’ll have people on stage and dance. I think it’s just a really good song to listen to and play live.

CC: Who was your favorite person to collaborate with on the album?
K: It was really interesting collaborating with Kid Cudi because we didn’t really have a plan since he’s homies with the executive producer of the CD. So he was just kind of hanging out, and the next thing you know we are making a song; we made the song and beat from scratch. To make the beat while being in the studio was cool because I’ve never done that before.

CC: Any other good memories you had while making the album?
K: I think one of the funny stories I had is when I was singing the “Luv Haus” song where it doesn’t sound like me at all. I had my best friend come in the studio with me and hold my hand because I was really nervous to sing. So, she came in the booth with me and held my hand. Then they told me if I tried to lie down while singing, it might help me sound better. So I’m laying down, holding my best friend’s hand while singing this in the studio, so it was really weird.

CC: How has touring been so far?
K: It’s really good. We basically split it off into two, and the first half was super good. Every night was the best night ever because everyone killed the show. When we had the second half, it sucked because I had the stomach flu for the first two days. And then the third day, the bus caught on fire. And the fourth day, I got into personal drama. And the fifth day, I found out that we had to cancel all of our Canada dates. So pretty much every day something went wrong. Now we are doing the West Coast, and those should be some good shows because I’ve never performed in Portland or Seattle, so it’s going to be crackin’.

CC: What can people expect from a Kreayshawn show?
K: I like to have a lot of energy, and I definitely put all of my energy on stage. So they can expect a lot of energy and fun. I tell a lot of jokes, so expect everything.