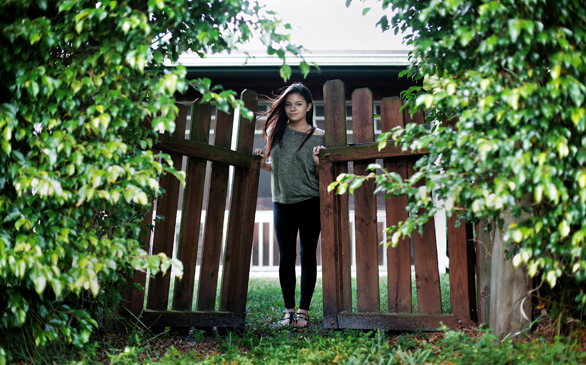 After being evicted, Nikki Maclaren lives with another family but is classified as homeless.
(Credit: Taylor Jones/Palm Beach Post/MCT)

Over the summer, Nikki Maclaren sat down at her computer and opened a browser.

In the search box, she typed: "how to get through college when poor."

Maclaren, now 18, was homeless her senior year at Palm Beach Central High. But the dark-haired, soft-spoken teen was determined to make a life for herself through education.

In May, Maclaren graduated with a 4.2 weighted GPA and an acceptance letter to the University of Central Florida.

She's made it work so far, using financial aid and scholarships to pay for part of her tuition; taking out loans for the rest, and joining the Army National Guard to help pay off those loans.

Maclaren's situation isn't unique. Experts say the number of homeless students is a growing - albeit not often discussed - issue at colleges and universities across the country.

"It is a very hidden problem," said Barbara Duffield, policy director for the National Association for the Education of Homeless Children and Youth. "There's an assumption that, if you're homeless, how can you think of going to college? But these students know their college degree will help them get out of their situation."

There is no good data and no easy way to track the number of homeless college students.

More than 33,000 students nationwide identified themselves as homeless in the 2010-11 school year, according to a newly expanded section of the Free Application for Federal Student Aid.

But Duffield and others say those numbers are "just the tip of the iceberg," since many homeless students either don't want to identify themselves or don't know about some of the financial aid resources available to them.

Florida public colleges and universities offer fee exemptions for students defined as homeless according to state statute. The number of students at community colleges using this homeless fee exemption has risen dramatically in recent years, from 155 in the 2006-2007 academic year to 638 last year.

Homeless college students can run the gamut from a single mother staying in a shelter and taking college classes to better her life, to a high school grad like Maclaren with no permanent residence living in the dorms and going to college full time, said Mary Cunningham, a senior researcher with the Urban Institute, a Washington think tank.

She said that, many times, homeless college students become more visible during holiday breaks, when dorms close and students find themselves without a place to stay.

There are a number of structures in place to help homeless students in K-12, but fewer for homeless college students, said Jennifer Martin with the National Association of Student Financial Aid Administrators.

Martin said some of the biggest challenges for these college students is finding housing and identifying resources to help them through college, whether it's financial assistance, finding health care options or navigating required paperwork.

"A lot of those things that other kids would take for granted, like buying textbooks or getting a college ID, are harder for homeless college students," Martin said.

She and others said the federal College Cost Reduction and Access Act of 2007 has made it easier for schools to identify and help homeless students. But enforcement of the law is spotty, Martin said, with some administrators either not understanding the law or being suspicious that the student is trying to "game the system."

"Some financial aid administrators will make homeless students jump through extra hoops, force them to go over every sordid detail of their story, which can be incredibly difficult and painful," Martin said. "It could make these students stop wanting to go through the process and give up."

Recently, some colleges, recognizing this population of students in their midst, have moved to do more to help their homeless attendees.

Valencia College in Orlando writes off more than $3.5 million annually in tuition and fees for homeless students and other students in need, it said. Pensacola State College over the summer teamed with the Santa Rosa County Public School District to offer a college field trip day to 18 homeless students so they could learn about opportunities and resources for them to attend college.

The Palm Beach County School District is pursuing scholarships for its homeless students to encourage them to go on to college, said Ellen Van Arsdale, director of Student Intervention Services, which oversees the district's Homeless Education Assistance Resource Team.

She said that, besides Maclaren, her team also knows of homeless students from Palm Beach County attending college at Cornell and Florida A&M; universities.

"We not only want to provide them with food, shelter and basic needs services, but we want them to further their education," Van Arsdale said. "These are the young people who will become adults who give back the most to our community."

She's thinking of majoring in public administration - a switch from her original major in criminal justice -because she someday wants to work with kids and nonprofits, helping others the way a homeless liaison with the school district helped her.

"It can be challenging sometimes," Maclaren said of her situation. "When I'm going through stuff, I don't have anyone to call. I'm just focusing on myself."

Maclaren's high school diploma now hangs in her dorm room, a symbol, she said, of what she is capable of doing.

"It's an accomplishment," she said. "Right now, it's one of the few, but it's going to get bigger."