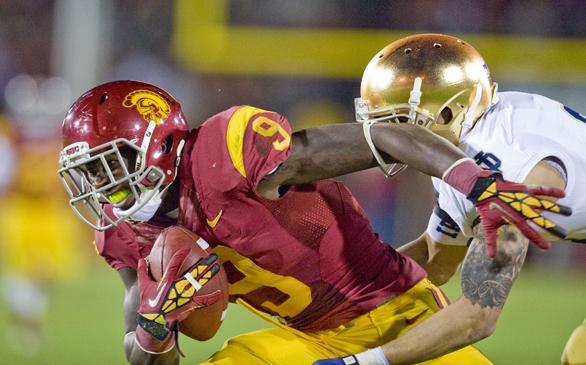 How will Marqise Lee and the USC Trojans play against Georgia Tech in the Sun Bowl on Dec. 31?
(Credit: Paul Rodriguez/Orange County Register/MCT)

Welcome to the bowl season, with 35 games accounting for approximately 122 hours of television programming over the next three weeks. Much of it will appear on ESPN, which would otherwise be forced to show a lot of billiards.

For all but the most rabid followers, it is difficult to differentiate the GoDaddy.com Bowl from the TaxSlayer.com Gator Bowl, or the AdvoCare V100 Independence Bowl from the Meineke Car Care Bowl of Texas.

But we're here to help. If you're a Bay Area football fan with keen interest but limited time, these 10 games are worth your attention:

This showdown of traditional powers - they have combined for 17 national titles - should be a ratings blockbuster. Whether it is competitive is another matter: Both teams play old-fashioned power football, but Alabama has better players and the best coach (Nick Saban) in the country.

These 11-win teams have combined to average 91.5 points per game. But the most compelling aspect of this matchup is the game that wasn't: The Wildcats canceled a home-and-home series with Oregon that was scheduled for 2011-12. They can't hide any longer.

The Sooners, who were squeezed out of the BCS by party crasher Northern Illinois, face their former Big 12 foe, led by Heisman Trophy winner Johnny Manziel.

The Badgers have more losses (five) than any other team in Rose Bowl history. But their brand of power football mirrors Stanford's. Wear protective clothing, even if watching the game from your couch.

Whenever Baylor is involved, the potential for a 100-point game exists. Add UCLA's potent offense, and we could see an RGIII-less repeat of the 2011 Alamo Bowl (Baylor 67, Washington 56).

The Spartans' first bowl appearance since 2006 also qualifies as a tryout for interim coach Kent Baer. Although Bowling Green gave Florida trouble three months ago, SJSU is the better team and should record victory No. 11. Unreal.

The former WAC and Mountain West rivals tangle in a dream matchup for the San Diego-based Poinsettia. Of the 35 games, this is the best bet to include a brawl - if not on the field, then in the stands.

The Trojans began the season with designs on the national title, which makes this the Letdown Bowl for Matt Barkley and Co. and a worthwhile investment of time for viewers: How will the Trojans respond?