(The Weinstein Company)
By Sabina Ibarra 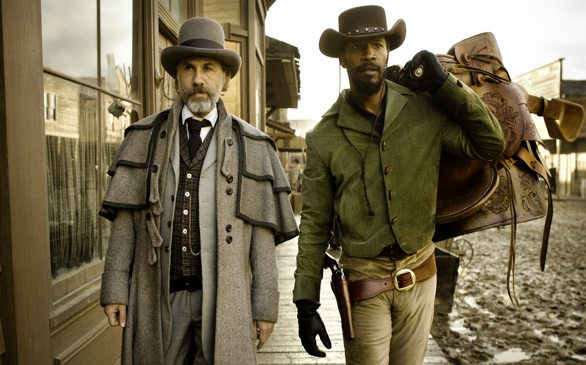 This Christmas, we’ve got a great feast courtesy of accomplished director Quentin Tarantino. It’s all wrapped up in a package called Django Unchained, a film where Tarantino treats the audience to the story of a freed slave.

Django (Jamie Foxx) gains his freedom thanks to a bounty hunter aptly named Dr. King Schultz (Christoph Waltz). Schultz enlists Django’s help to kill the nefarious Brittle brothers. However, all Django wants after helping Schultz is to find his wife Broomhilda (Kerry Washington), who has been sold to the spoiled brat prince of the South, Calvin Candie (Leonardo DiCaprio). What follow are an unlikely partnership and a rip-roaring adventure where two quick-draw gunslingers dish out justice and lay out evildoers who deserve it.

Django Unchained is a fantastic revenge romp by ways of Kill Bill. However, instead of swords, the weapons of choice are guns, and the shootouts are gory fun in the beloved Tarantino style. From the songs made for it, to the scrolling text to describe the journey they go through – all of these little nods to the Spaghetti Western style are fantastic. In addition, Waltz and Foxx make a dynamic duo; I predict they will officially go down as one of the best teams to hit the screen since Butch Cassidy and the Sundance Kid.

However, the entire ensemble’s performances are amazing as well. DiCaprio makes a transformation as a charismatic southern playboy who uses people as entertainment, and he throws the biggest fits when things don’t go his way. His commitment to this dashingly cruel character breaks all of the ‘90s heartthrob stereotypes that were once placed on him (Jack and Romeo who?).

Then there is Samuel L. Jackson, who has played bad-asses and likable bad guys before (Pulp Fiction, The Avengers). But in Django Unchained, he plays an extremely hateful character (rivaling to his evil character in Lakeview Terrace). Yes, he has funny lines here and there, but his truthful portrayal of the character Stephen makes him simply detestable. It’s a testament of just how committed he was to his role; he even becomes a bigger villain than Candie.

Most importantly, Django Unchained treats a very grisly time in our history in a raw manner, with two justice-serving men doing what we have always wanted to see done. Like the Nazis in Inglourious Basterds (2009), we get to see the most evil of men in racist southern America get theirs.

At the same time, every minute is enjoyable and funny. The cinematography is lush, and the saturation is on point. But what must also be noted is that the sensitive material about slavery in America is handled truthfully, and the comedy in the film breaks the tension in a smart, yet respectful manner.

With that being said, Django Unchained is definitely one of Tarantino’s best works and a must-see for this holiday season. His knack for storytelling is as fresh as ever even as the art of film as he loved it seems to be fading away.

The film might be one of his last (he might retire in the near future, according to The Huffington Post). If it is, it would be a shame to miss Django Unchained on the big screen in all of its glory.