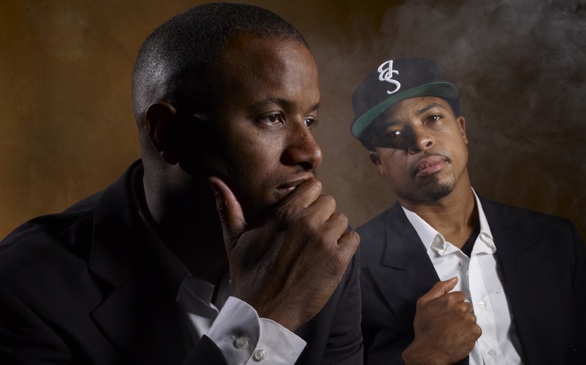 Zion I showed off its hip-hop and freestyle skills at the show at the El Rey.
(Credit: N/A)

Hip-hop ensemble Zion I performed at the El Rey Theatre on Friday, Dec.14 in support of its latest EP, ShadowBoxing. The crowd was looking marginal at best, perhaps due to the frigid weather, but spirits ran high as openers Free The Robots and A-1 warmed up the crowd for the night ahead.

With much applause, Zion I producer DJ AmpLive took to the stage for a quick DJ set before being joined by MC Zumbi and Deuce Eclipse, a pony-tailed free stylist who would serve as one of the better surprises of the night.

With AmpLive’s creative control behind the music, Zumbi let loose on the microphone while Deuce meandered around behind him, seemingly lost on stage. But when Zumbi stepped back, Deuce broke into a rapid-fire freestyle that sounded like a cross between Busta Rhymes and Cypress Hill. This back-and-forth between the MCs went on throughout the set as Zion I rifled through its massive arsenal of mixtapes and singles and as AmpLive provided the backing. The DJ/producer joined the MCs on stage with what seemed like a sampler guitar, mixing live in a strange, yet really awesome set.

Zion I’s passionate fan base was out in full front. However, it was strange to see the El Rey so empty. It was a fact that became harder and harder to ignore as the night progressed and the crowd got thinner.

A roaring applause (by whoever was left in the theater) greeted dubstep producer Minnesota when he performed after Zion I. Hot on the tail of the release of his first EP Altered States, the three dozen or so still left in the theater were in store for a great, albeit somewhat odd show. For a guy who is known for his rowdy, dubstep performances, an empty theater with only a couple of people standing by isn’t the best environment.

But those few who hung around were there to party, and Minnesota was happy to oblige. As one of the most buzzed about artists in the genre, Christian Bauhofer (aka Minnesota) delivered the goods.  Unfortunately, disappointingly low-volume levels plagued his set, which distracted from the music at hand.  Regardless, it was still a fun set that deserved much more from the venue and crowd.

If tours like these are any indication, the bond between hip-hop and dubstep will continue to grow as people discover the respective genres and expand their tastes. It’s a partnership that few would protest.