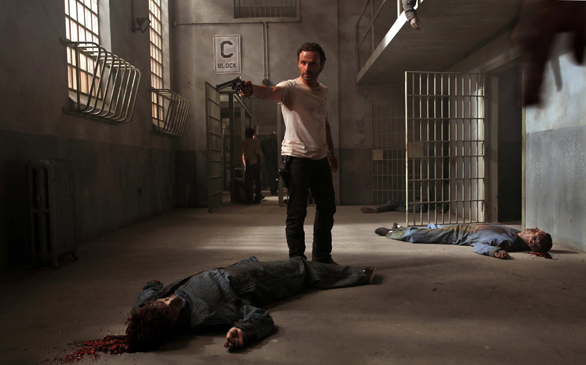 It's often difficult to heap praise upon a medium that has tortured us with "Jersey Shore" and Honey Boo Boo. But for all its glaring faults, television continues to turn out some exceptional work. Here are 10 great examples in 2012 that made my job a lot more fun:

1. "Breaking Bad" (AMC) - Season 4 of this still-magnificent meth drama ended with Walter White (Bryan Cranston) vanquishing the monster. In the first half of its farewell season, Walter became the monster. High on his own hubris, the meek chemistry teacher-turned-ruthless-kingpin spiraled deeper and deeper into the dark depths while alienating his wife (Anna Gunn) and his longtime partner in crime (Aaron Paul). His journey was disturbing, horrifying - and absolutely mesmerizing. And now that Walter's DEA agent brother-in-law (Dean Norris) finally appears to be onto him, I can hardly wait to see where this twisted morality tale takes us next.

2. "Sons of Anarchy" (FX) - The hog-straddling bad boys of this biker drama have always made for good TV. But Season 5 revved up the raw intensity to full-throttle as it chronicled Jax Teller's (Charlie Hunnam) tumultuous transition to club leader and his ugly dealings with the traitorous Clay (Ron Perlman). (Ah, yes, uneasy lies the head that wears a crown). Moreover, the usual violence and villainy was tinged with visceral heartbreak (R.I.P., Opie), and the show benefitted from jolts of fresh energy provided by Jimmy Smits and Harold Perrineau. The excessive plot gyrations drive me bonkers at times, but this so-called "Hamlet on Harleys" has managed to keep its motor runnin'.

3. "Homeland" (Showtime) - OK, so that whole bit about hacking into the vice president's pacemaker was a plot line straight out of crazy town. And the hit-and-run storyline? Ugh. After nabbing an Emmy for its extraordinary first season, this political thriller occasionally fell prey to "24"-like contrivances. Still, "Homeland" found ways to keep us on the edge of our seats - and plugged into the twisted relationship between high-strung CIA operative Carrie Mathison (Claire Danes) and bedeviled congressman Nicholas Brody (Damian Lewis). Meanwhile, the performances by the entire cast continued to be brilliant.

4. "The Walking Dead" (AMC) - Any horror show with a decent special-effects budget can give off a creepy vibe by filling the screen with ghastly ghouls and splattering their brains to bits. That's the easy part. But what makes this survivor saga so impressive is the way it works on a deeply human level. Anyone with a ticking heart, for example, had to be touched by the anguish-filled episode in which we bid goodbye to Lori (Sarah Wayne Callies). Indeed, there are times when all the zombie brain-bashing provides a welcome break from the show's emotional brutality. Like "Sons of Anarchy," "Dead" was bolstered by new characters, in this case a sword-wielding mystery woman named Michonne (Danai Gurira), and the tyrannical Governor (David Morrissey).

5. "Girls" (HBO) - Lena Dunham may or may not be the voice of her generation, but one thing is clear: She knows how to deliver a sly, brazen, polarizing and hilariously original show. Taking inspiration from the anxieties of her own post-college years, Dunham created and stars in this more-gritty-than-glitzy comedy about four young gal pals adrift in a recession-era New York. It's "Sex and the City" stripped of its fairy-tale fantasies. Instead of basking in designer fashions and fizzy cocktails, these flawed characters face brutal job prospects, humiliating letdowns and lousy sex. When we weren't cringing, we were doubled over in mirth.

6. "Mad Men" (AMC) - It was a season like none other for this acclaimed 1960s drama. Betty got fat. Roger dropped acid. Lane checked out. Peggy flew the coop. ... And then there was Megan (Jessica Pare), who dazzled everyone with her erotically charged party scene ("Zou Bisou Bisou," indeed!). The emotionally fragile newlywed became Season 5's red-hot standout, and her sometimes-turbulent marriage to Don Draper (Jon Hamm) epitomized the era's growing cultural divide. For the first time in five tries, "Mad Men" failed to win the Emmy for best drama, but it continued to wow us with its style and smarts.

7. "Parenthood" (NBC) - I've learned my lesson. Never again will I watch this superb family drama without having the tissues handy. Season 4 really turned on the waterworks with a heartbreaking breast-cancer story line that coaxed Emmy-caliber performances from Monica Potter and Peter Krause. Where other shows might have come across as mawkishly heavy handed, "Parenthood" brought emotional depth and an eye for detail to the subject. Fortunately, the series also continued to find ways to display a sense of humor amid the poignancy. Along those lines, Ray Romano proved to be a great addition as a grouchy photographer with a crush on Lauren Graham.

8. "Louie" (FX) - Season 3 of this idiosyncratic comedy featured a little more continuity and cohesiveness than usual, but creator-star-writer Louis C.K. still took joy in defying convention and taking us to unexpected places as his lonely hangdog character embarked on compelling journeys of self-discovery. "Louie" is that unique little gem that can be bleak, yet sweet, and sad, yet gut-bustingly hilarious. And this season, the gem gave off even more of a shine, thanks, in part, to notable guest turns by Parker Posey, Jerry Seinfeld, Melissa Leo, Sarah Silverman, David Lynch and others.

9. "Game of Thrones" (HBO) - Sometimes we just need the small screen to whisk away from humdrum everyday life to big imaginary worlds full of mystery and mysticism, spectacle and scope. So we continue to thank the TV gods for blessing us with this massive medieval fantasy. "Thrones" can feel unwieldy at times with its multitude of power-hungry characters and tangled storylines. But when it's at its best - as with the extraordinary "Blackwater" episode - I gladly lap up every bit of its epic awesomeness and visual majesty.

10. "New Girl" (Fox) - What started out looking like a sitcom mainly tied to the perky-quirky charms of Zooey Deschanel has become an exceptional ensemble piece, thanks to the efforts of Max Greenfield, Jake Johnson and Lamorne Morris, each of whom brings his own specific comedic style to the party. Fortified with great chemistry, the entire cast in an irresistible force, spouting goofy one-liners that put us in constant crack-up mode. They're super-weird and unpredictable yet very relatable.