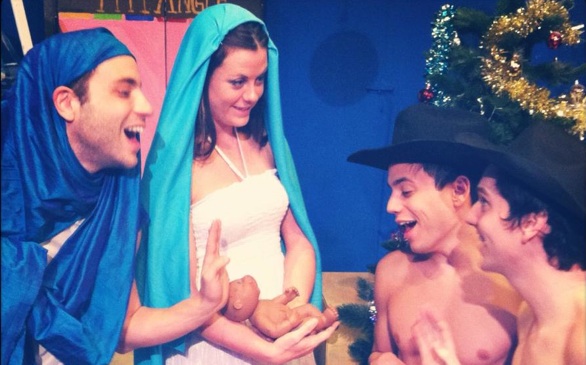 When you walk into The Avery Schreiber Theatre, you immediately think you’re going to have a terrible time. There's seating for maybe 50 people, an ensemble of about 20, and it's all in a space that feels about as big as a college student’s apartment. And you’re here to see a show called “The Gayest Christmas Pageant Ever!” If you’re lucky, it’ll be as good as terrible amateur improv. You sigh and wonder what you’ve gotten yourself into.

But the minute the lights dim and the show starts, you realize the actors know exactly how you feel, and hell, they’re going to make you laugh about it whether you want to or not.

Smart and funny, with a not-so-subtle political message, Joe Marshall’s “The Gayest Christmas Pageant Ever!” holds true to its title, earning the crown for the gayest holiday event you’ll go to all year. And it’s absolutely fabulous.

In this play, a "crazy, drama-addicted" team of actors must put on a play in a few short weeks after the theatre's playwright abandons them and takes his script with him. This is all thanks to Jim, "the pot-smoking straight tech guy" who offended the playwright. What follows is a hilarious, non-conservative play that will keep you laughing all night.

"The Gayest Christmas Pageant Ever!" is a bit mind-bending like Inception; it’s a Christmas show about putting on a Christmas show, with gay actors that play even gayer actors, and it all takes place in a small community theatre exactly like the one you’re sitting in. Are you still with me?

It’s a lot to take on, but the cast's performance is impressive. They take the tiny space they have to work with and make it huge. Sound echos off every wall, and although the actors scream a bit too loudly sometimes, you love every line.

And yes, an open mind is necessary to enjoy this show. Jesus is a gay Mexican, there’s a loud, gun-toting black man, and the pizza delivery girl is Asian. However, director Paul Storiale is purposeful with his casting and does a good job playing with stereotypes and religion. In the end, he creates a reflexive show that leaves you feeling good inside.

The farting piano player Martha, played by Bri Azmoudeh, and the costume-designer Tarquin, played by Josh Payne, are both a bit over the top, but the whole show is about being over the top. More importantly, these essential characters help bridge the gap between the real and the ironic.

In the end, “The Gayest Christmas Pageant Ever!” is an excellent way to bring in the holidays and, as main character Rod says, “It’s gay men that make theatre fabulous.”

There are only two performaances of "The Gayest Christmas Pageant Ever!" left on Dec. 29 and Dec. 30.