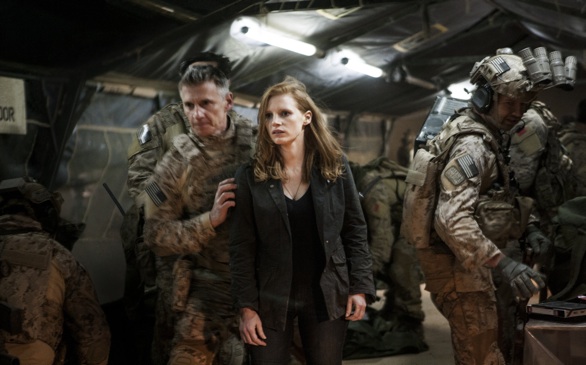 Jessica Chastain is at the center of this Oscar-worthy film.
(Credit: Jonathan Olley)

Director Kathryn Bigelow’s current picture, Zero Dark Thirty, is grabbing headlines; Oscar buzz has already begun circulating around this dramatization of the endless hunt for Osama bin Laden. The film spans over the course of 10 years, beginning from the 9/11 attacks to bin Laden’s death at the hands of Navy SEAL Team Six and the tight knit team of CIA operatives on May 2, 2011.

The Oscar-winning director takes audiences on a suspenseful ride that oozes with a very skilled and calculated approach to filmmaking – the same approach that grabbed the world’s attention with The Hurt Locker in 2008.

Zero Dark Thirty was written based on first-hand accounts taken from people directly involved in the mission. At the center of it is Maya, played by Academy Award-nominated actress, Jessica Chastain (The Tree of Life, The Help), a young CIA officer whose sole job is finding terrorists.

Highly intelligent but innocent to the job’s grim conviction to stop terrorism, Maya is an incredible driving force. She’s an inspiring individual trying to make a difference in a very large and complex scheme.

“Playing the character, I grew so much compassion for this woman, who really sacrificed so much for this mission. She became almost a stranger to herself at the end of the film, and I just loved her from the moment I read her. Mark [Boal, writer] got the dry facts of the greatest manhunt in history and created an arc, and [he] really put the light on the people that worked so hard and never got the acknowledgment,” said Chastain.

With three months of preparation prior to shooting, Chastain immersed herself in the script and spent hours asking all the important questions (Chastain was unable to meet the real woman her character is based on because she is now an undercover agent). She used her imagination to fill in the blanks and to create a character that is surrounded in secrecy of her own.

Bigelow (who has a reputation to direct films that happen to take place in “male-dominated worlds”) was excited to direct Zero Dark Thirty with Maya as the main character.

Following the duo’s true-to-life depiction of the lives of the men and women behind Army bomb squads in Iraq in The Hurt Locker, Bigelow and Boal created a similar vision and approach; they were the perfect team to bring light to a subject the public knows very little about.

“What struck me about the screenplay was how inheritably dramatic the story is and was,” said Bigelow. “That 10 year-long journey was a very riveting, galvanizing story that gave us a real glimpse at the intelligence hunt on the ground through the eyes of the character that Jessica [Chastain] and Jason [Clarke] play…of what it would be like to hunt one of the most dangerous men – the dedication, the courage, the sacrifice and the price that they pay.”

With the recent release of films depicting political events in U.S history, such as Argo and Lincoln, Zero Dark Thirty is sure to stand out as an “unsentimental, unsparing and unsettling raw account.”

However, the film has received some negative attention and has opened a debate on the CIA’s method of interrogation, according to the New York Times. Zero Dark Thirty shows brutal treatment; some of it is based on real information, and some of it is not.

Even though the film has drawn criticism and controversy for showing enhanced interrogation, it was important for Boal to show that aspect of interrogation and to also show audiences that despite torture, it didn’t stop terrorism from occurring.

“I understand those scenes are graphic, unsparing and unsentimental, but what the film does over the course of two hours is show the complexity of the debate and the number of different ways that information came to the CIA,” said Boal.

“I wish it wasn’t part of our history, but it was,” added Bigelow.

Zero Dark Thirty is a perfect combination of action-film and investigative reporting, and it is visualized in a way that allows the viewer to feel like it’s unfolding around him or her in real time.

“I’m very excited that people are now seeing the film and realizing it’s not a propaganda film, and it doesn’t have an agenda; it just tries to show a moment in history as accurately as possible,” said Chastain.

Special Features
Digital theater is all the rage, but could it destroy the live stage?
220 views