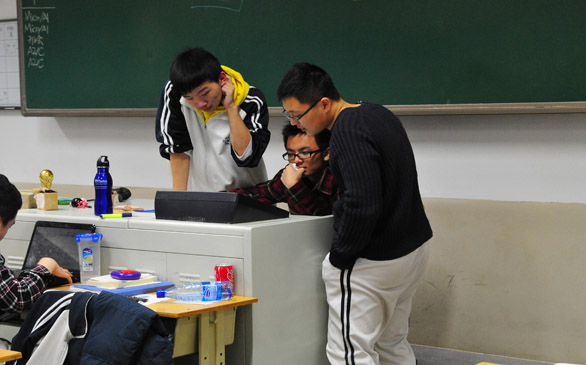 Teachers at a new high school here, like teachers the world over, like to boast about all the colleges that have accepted their students.

In the school's main lobby stands a 10-foot sign with the names of more than 50 universities.

All are top-notch and high-profile - and not one is in China. Instead, the 190 students in this public school will head to colleges in the United States.

At the school - with the unwieldy name High School Attached to Capital Normal University, or HSCNU -Chinese students take AP classes taught in English by American or Canadian teachers.

When the time comes to apply to U.S. colleges, they get help through a new partnership with Germantown Academy.

HSCNU pays the private school in Fort Washington, Pa., to provide one-on-one guidance counseling to Chinese students in person three times a year, or long-distance via Skype and email. Germantown's administrators also advise the school on its AP curriculum.

The popularity of HSCNU reflects the growing number of middle-class families with the desire - and finances - to send their sons and daughters abroad to study.

"They know that if the students are going to be players on the world stage, they need their best students to learn to think, create and innovate in the same way that kids from Western countries do," said James Connor, head of school at Germantown.

The relationship, Connor said, "provides us with a valuable partner in China to whom we can send our students to visit, and over time to stay and study."

For all the hand-wringing over the economic demise of the United States, Chinese students still view American education as superior.

The number of undergraduates from China on U.S. campuses has surged from 8,659 to 74,516 in the last decade, according to the nonprofit Institute of International Education in New York.

When candidates for graduate degrees are included, China has more students in the United States -194,029 - than any other country, the institute reported.

"Though from many aspects China is growing, a U.S. education is still the best, the number one in the world," said Heqing "Isabelle" Huang, an 18-year-old senior who has applied to five schools for early action: Northwestern, Virginia, Michigan, Notre Dame, and Illinois.

HSCNU was the first public school of its kind in Beijing when it opened in 2008. Now, there are 10 public schools that offer AP courses, said Liang Yuxue, vice principal of the school.

She said students still must complete a core curriculum for a high school diploma in China, but also can select among nine AP courses - from U.S. history and English literature to calculus and physics.

The program is housed in a new three-story building adjacent to a traditional high school that is also affiliated with the same university.

When students enter the main hallway, signs above the entryway remind them: "Only English."

Bulletin boards feature photos from summer sessions at U.S. universities. One student went to the University of Southern California; another to Notre Dame.

For students, the decision to veer from a traditional path for high school is not taken lightly.

Along with their parents, they must sign a pledge acknowledging they understand that by going in this direction, they will not be eligible to apply to Chinese universities.

That's because in China, high school students spend years preparing for the three-day monster college examination known as the gaokao (or gow-cow). Chinese colleges select students based on this score and nothing else. No 500-word personal statement, no list of extracurricular activities, no community service projects.

Without the weight of the gaokao test hanging over them, several HSCNU students said in interviews, they felt liberated. They said they had more opportunity to interact with teachers and were free to explore outside interests.

"I'm a guy who wants to experience different things," he said during a lunch break.

Xu likes public speaking, plays the Chinese flute, and recently traveled to a remote region of China to tutor younger children. He took eight AP examinations and scored a high of five on five tests, and a four in three subjects. His wish list includes Michigan, Duke, and the University of Pennsylvania. Last summer, Xu got a taste of college by taking classes at Yale.

"I realize the logic of foreign teachers is a little different," Xu said. "They can think outside the box, and that's crucial for Chinese students. If you're just a study nerd, what can you do for society?"

His family's decision to send him to HSCNU had as much to do with frustration over the rigid Chinese educational system as their respect for American-style colleges.

Xu's parents used to live in the poor interior province of Anhui. His father, an entrepreneur in the optical cable business, moved the family to Beijing.

In China, however, families maintain official residency in the place of their birth. Xu would have to return to high school in Anhui in order to take the gaokao test there. Instead, his parents are spending $14,000 a year to send him to HSCNU.

His mother, Wu Qingmei, said in an email exchange through her son that the potential benefits of studying abroad outweighed the cost. "When he graduated from middle school, I thought, 'Why don't we send him to a bigger stage, to have an international experience?' " she said.

Ruiqi "Lady" Shi, 17, who is applying to East Coast colleges including Dickinson and Bryn Mawr, is in the same predicament as her classmate. She would have to return to the southern city of Zhuhai for high school.

Like American seniors, she's been staying up late to complete her college applications. She took three AP tests and got a high score of five in each subject.

Chinese teachers "teach us how to get good scores," she said. "Education in the U.S. can teach people how to think and get a better future."