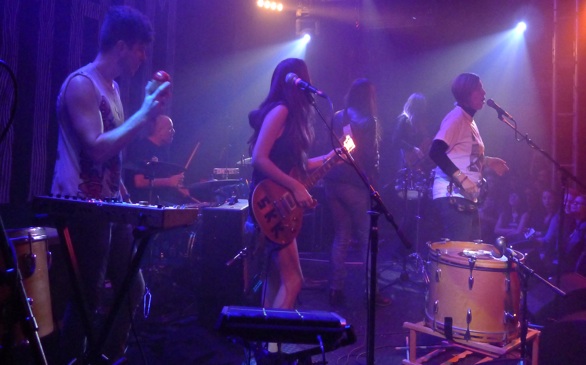 Haim is a band that includes three sisters and a mister.
(Credit: Zach Bourque )

Haim is another of a series of dark horse bands of 2012 that came out of seemingly nowhere to develop a massive following. The band has amassed this with nothing but a three-song EP and a series of music videos showcasing the ladies’ throwback style and music.

Self-described as a band of three sisters and a mister, the ladies of Haim grew up playing in a cover band with their folks. Their general interactions on stage reinforced the fact that yes; these three ladies are indeed sisters. There was a good amount of friendly bickering, charming antics and clever puns throughout their hour or so set that served as wonderful amusement when the ladies weren’t rocking out.

With a throwback, ‘80s-tinged style in the vain of Twin Shadow, Haim can certainly rock. Extremely catchy and impossible not to enjoy, Haim is highly contagious. The ladies played new and old tracks, including “Forever,” “Don’t Save Me” and “Go Slow” off their first EP as well as new material off their upcoming full length.

And in what might be the single biggest “awww” moment of the season, Mom and Dad joined the three sisters onstage for a glorious rendition of “Ride Sally, Ride.” There’s something to be said about three hip daughters jamming with their mom and pop in front of a sold-out audience in West Hollywood (and it turns out Dad slays on the drums).

Haim isn’t anything but a good time. These sisters (and the mister) are about to explode faster than a stick of dynamite on a Bunsen burner, and everyone who attended the show on that cold night can say they were there for the fire. With airplay on 98.7, opening gigs for Florence and the Machine and an already ecstatic fan base, Haim is on its way to paradise and rock ‘n’ roll stardom in 2013.