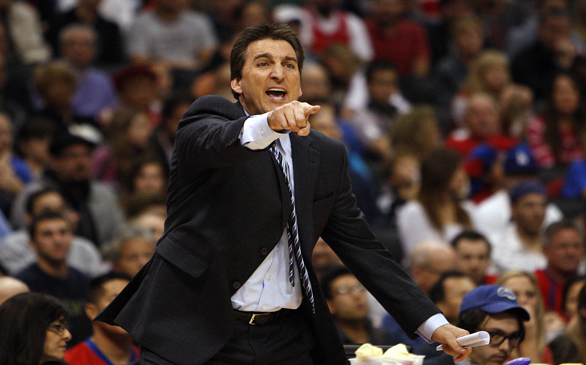 When the Los Angeles Clippers acquired top point guard Chris Paul in December of 2011, Blake Griffin said, “It’s Gonna Be Lob City.” What Griffin said at the time ignited much talk around the league, fans, reporters, and also from his coach Vinny Del Negro.

“I hope it’s ‘Win City,’ not ‘Lob City,’” Del Negro said at one point afterward. Del Negro, thus far this season, has guided the Clippers to a hot 19-6 start. Currently, the team owns a franchise-record 11 consecutive victories after they defeated the visiting New Orleans Hornets Wednesday night at Staples Center before a sold out crowd of 19,188. It was the team’s 14th sell-out this season.

The winning-streak feels so good that even owner Donald Sterling visited the locker room after the affair, as he congratulated the players with handshakes and smiles. Life is, indeed, good.

“The food tastes better, the music sounds better, you sleep a little better,” said Paul, who is 27 years of age. “Everything seems better when you’re winning.” It sure does. Clipper nation has never before experienced such a winning mode.

Paul points out that the team’s solid starts in games have attributed to their success in the past 11 games. “We’ve been getting off to good starts and not putting so much pressure on our bench,” he said.

Griffin contributed 18 points, while Jamal Crawford chipped in 17 off the bench. The others who ended with double figures were DeAndre Jordan (12) and Matt Barnes (11).

Paul’s leadership and character on and off the court is obvious and beyond valuable. But where’s Del Negro in all of this?

Well, he keeps his cool and stays humble even though we can perceive that deep down inside of him, he’s excited.

“It was about executing our game plan,” said Del Negro after the win. “We were disappointed in our performance against them the first time, and we wanted to play well tonight, but we always want to play well no matter who we’re playing.”