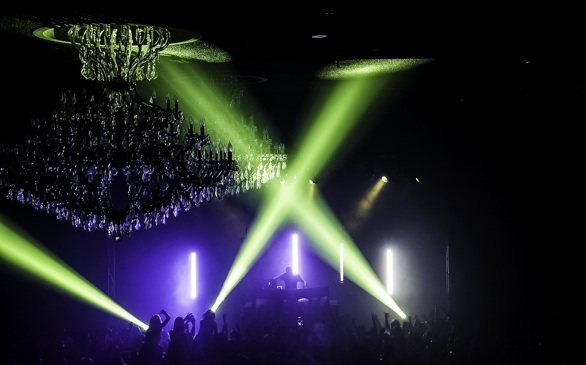 Dillon Francis performed in front of a packed crowd at the El Rey.
(Credit: Josh Herwitt)

Dillon Francis is living a dream. It may not include Ferraris, private jets or butlers just yet, but he’s still living his dream.

When the Los Angeles native dropped out of community college to pursue a career in music, he never thought he’d be selling out shows at the El Rey a few years later. But that’s the reality for the 25-year-old producer, after packing the historic art deco theatre three straight nights last weekend.

Francis has been credited with pioneering one of electronic dance music’s newest movements: moombahton. His early ventures in moombahton — a fusion of Dutch house and reggaeton created by Dave Nada in 2010 — have turned him from little-known DJ to international sensation.

For one, it’s helped him cultivate friendships with some of the biggest names in EDM and take on new projects along the way. He’s worked with Calvin Harris and Diplo, whom he calls his “Dad,” and even more recently has become close with Skrillex.

“I had no f****** idea what [moombahton] was at the time,” recalled Francis, who got his start interning for friend Cory Nitta in Atlanta. “I was really interested because it comes from reggaeton..."

At a time when electro house and dubstep have just about been beaten to death by most of his peers, Francis’ connection to the moombahton scene is what sets him apart from the rest of the pack.

“I feel like I’ve gotten a lot better at music selection … and how I try to take people on a journey,” he said. “[I’m] trying to get everyone to listen to everything. Maybe some person will be pissed off because all they wanted to hear was banger after banger after banger, but that’s not what I want to do.”

Many of those who showed up at the El Rey were game for whatever Francis had in his queue, as he energized a crowded dance floor consisting largely of college-aged ravers and beat freaks.

For the better part of his 90-minute set, Francis had his audience on a string. He played enough moombahton to make you shake your rump at least a couple times and picked up the pace later in the evening by dropping his new remix of Nicky Romero’s “Like Home.” When he started to sedate us with a few minimalistic offerings, he quickly pulled us back in with some of EDM’s catchiest tunes: Daft Punk’s “One More Time,” Justice’s “D.A.N.C.E” and Duck Sauce’s “Barbra Streisand.”

So with only a few dates left on his first U.S. headlining tour, what’s next for Francis?

“An album,” he answered without hesitation.

Francis, in fact, already has a handful of songs in the works for his first full-length studio effort, though no timetable has been set for its release.

Of course, at the rate things are changing in EDM, it may not be long before the industry’s next sonic concoction catches on fire.

“If I knew [what it was], I would be making it right now,” said Francis.