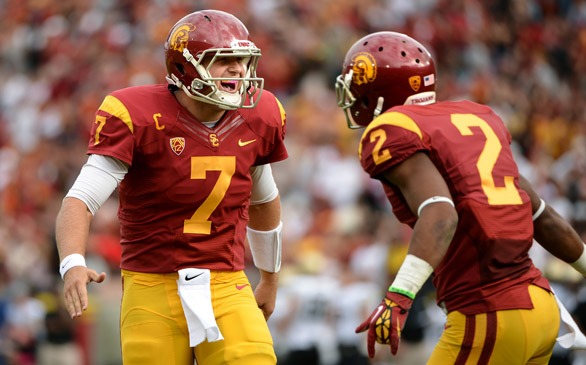 Following a long two-year bowl ban, the USC Trojans are headed to the Hyundai Sun Bowl on Dec. 31. After starting off the year ranked No. 1, the Trojans finished the season losing four of their last five games.

USC is putting its bowl dreams on the line versus the Georgia Tech Yellow Jackets, which is the only team with a losing record that is playing in a bowl game. The 6-7 Yellow Jackets are making their second consecutive trip to El Paso, Texas.

One of the biggest concerns for the Trojans is whether or not Matt Barkley will see action.

Barkley attended the final practice for the Trojans on Monday, Dec. 24, but he did not practice with the team because he is still recovering from a strained shoulder injury he sustained during the Trojans 38-28 loss to UCLA on Nov. 17.

Without question, Barkley's performance this season was as disappointing as the Trojans’ record. But despite the fact that he threw a Pac-12 high of 15 interceptions, Barkley did manage to throw for over 3,000 yards and 36 touchdowns. He also became the all-time USC and Pac-12 leader in touchdown passes.

Barkley's injury will be evaluated once the team arrives in Texas. If the senior quarterback is not able to play, Max Wittek will start for the Trojans. Wittek last start came in the last game of the regular season versus Notre Dame on Nov. 24. He was 14-of-23 for 186 passing yards and one touchdown; he also threw two interceptions.

Both teams are going into this bowl game with something to prove, but this is unfamiliar territory for both programs. This is the first meeting between USC and Georgia Tech since 1973, a time when the Trojans came out victorious by a score of 23-6. The Yellow Jackets are 1-2 against USC.

When comparing both teams, they are almost evenly matched. USC and Georgia Tech both average 34 points on offense; in terms of defense, they are both allowing between 24-29 points per game.

In order for USC to win, safety T.J. McDonald, one of the leaders for the Trojan defense, must have an impact game. The Trojans are taking on Georgia Tech’s explosive running game, led by unconventional quarterback Tevin Washington, who rushed for 1773 yards and seven touchdowns during the season.

The Yellow Jackets are also ranked fourth in the nation in rushing yards since they amass 312.5 rushing yards a game. Running back Orwin Smith rushed for 673 yards and five touchdowns. Smith and Washington are a one-two punch on the ground for Georgia Tech.

But the Trojans have two explosive running backs of their own. Silas Redd and Curtis McNeal lead USC in rushing, with Redd who has rushed 817 yards and had nine touchdowns and McNeal with 696 yards and two touchdowns.

Although Georgia Tech might have an advantage when it comes to a running game, USC clearly out-talents the Yellow Jackets in receivers. USC is equipped with a dynamic duo in Robert Woods and Marqise Lee. Woods had 73 receptions for 813 yards and 11 touchdowns. Woods also became the all-time leader in receptions in USC history and set a single-game record for touchdown catches, passing Dwayne Jarrett on USC's career receptions list.

USC, arguably, has the most productive wide receiver in the nation. Lee was the first Trojan to win the Biletnikoff Award, which is given to the nation's most outstanding receiver. Lee broke the Pac-12 record for most receptions with 112 and piled 1,680 receiving yards and 14 touchdowns.

In terms of talent, the Trojans hold an edge against the Yellow Jackets. Believe it or not, this is a statement bowl game for the Trojans. Expect the Trojans to pull out a victory.

Football
NFC preview: How the Eagles stack up against the rest of the conference
1,035 views

Football
Littleton needs to be on the money for Rams
1,019 views

Football
Austin Proehl, hopes to join his father with a Super Bowl ring, helps out by playing role of Edelman
1,812 views