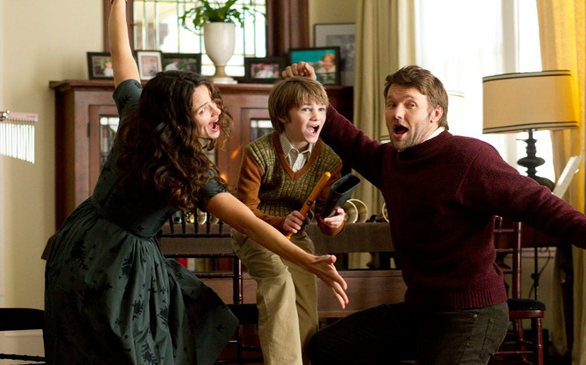 They could have fed a Third World nation, or poured money into cancer research, or tried saving those polar bears stuck on itty-bitty ice floes. But no-o-o-o-o, Hollywood had better things to do with its hundreds of millions of dollars, like letting Adam Sandler make That's My Boy, and thinking we needed a remake of Red Dawn.

Sure, the film biz isn't in it for the philanthropy, and it's totally unfair to hold the expenditure of $250 million (John Carter) or even a paltry $102 million (Cloud Atlas) against actors, directors, and second grips engaged in earnest endeavors to create something memorable, or moving, or just fun.

After all, no one intentionally sets out to make 90 minutes or two hours or three hours of stupefying dreck, right? "Right?! RIGHT?!!"

They're in alphabetical order, except for the last one. Maybe Peter Jackson's first installment in his new Middle-earth trilogy isn't really "that awful, but it is an unexpected journey - unexpectedly twee and tech-obsessed, like being stuck in an endless video game, except a fellow with furry feet has run off with your gamepad.

Cloud Atlas - Cross-dimensional, time-traveling cosmic hooey, although Tom Hanks and Halle Berry's postapocalyptic patois would make for a great comedy sketch. The gods of reincarnation should sue. And here's a question: Are co-director Lana Wachowski and Clementine Kruczynski, the heroine of Eternal Sunshine of the Spotless Mind played by Kate Winslet, the same person?

John Carter - Pixar animator Andrew Stanton tried his hand with live-action in this $250 million Disney fiasco, an adaptation of Edgar Rice Burroughs' John Carter of Mars - or Barsoom, as the pulp scribe was wont to call the Red Planet. Lynn Collins is Princess Dejah, who hails from Helium, and some of the warring creatures she and Civil War-era Earthling Taylor Kitsch contend with are Tharks, Therns and Zodangans. Never mind the giant green-skinned, multi-limbed creatures - look out for those Barsoomian subtitles!

Lola Versus - The charming and goofy Greta Gerwig (Damsels in Distress, To Rome With Love) gets the title role in a hopelessly cliched post-breakup/ single-in-New-York character study. Wait for the gorgeous, black-and-white post-breakup/single-girl-in-New York character study Frances Ha, coming in 2013 from Gerwig's real-life companion, her Greenberg writer/director Noah Baumbach. And then let's hope Gerwig can move on.

The Odd Life of Timothy Green - A fertility-clinic fantasy, with Jennifer Garner and Joel Edgerton as the parents who want so, so much to have a child but can't - and then one pops out of the vegetable garden, a boy with leafy shins. Impossible treacle.

Playing for Keeps - A pack of soccer moms - Uma Thurman, Catherine Zeta-Jones and Judy Greer among them - throw themselves at former soccer pro Gerard Butler, who only wants to throw himself back into the life of his ex, Jessica Biel. A rom-com full of contrived rom and fake com.

Red Dawn - In John Milius' teen militia fantasy, released in 1984, the Soviet Union drops platoons of paratroopers down on the sleepy Midwest, but luckily Charlie Sheen and Patrick Swayze are there to save the day. In this ill-advised redo, North Korea is the enemy, and Chris Hemsworth leads a couple of Joshes (Josh Hutcherson, Josh Peck) in a battle to save Washington State. Somehow, it's not the same.

Seeking a Friend for the End of the World - Don't know what's worse, Keira Knightley's pseudo-hipster cool (and that vintage vinyl she lugs around), or filmmaker Lorene Scafaria's phony Delaware and New Jersey locations. Giving the apocalypse a bad name.

That's My Boy - Adam Sandler and Andy Samberg as estranged father and son - what could be funnier? Waiting in line to pay your PGW bill? A warm and fuzzy embrace of all-American values - incest, statutory rape, strip clubs, obesity, and homophobia.

Tim and Eric's Billion Dollar Movie - Even if you were stoned, this cheap and surreal shopping-mall farce wouldn't be funny. In fact, if you were stoned this could be dangerous - you actually might go ahead and really stick forks in your eyes. Temple alums Tim Heidecker and Eric Wareheim should have stayed on Adult Swim.

The Hobbit: An Unexpected Journey - All this from J.R.R.'s little book? Two hours and 49 minutes of dwarfs and elves, orcs and wizards, goblins and trolls chasing each other across flimsy rope bridges - with two more installments to come? The beginning, and end, of 48 frames-per-second technology. Watch the Air New Zealand in-flight safety video instead - it's a lot shorter, and smarter.

Special Features
This L.A. activist went to jail. Now she runs a film fest that puts justice on trial
303 views

Special Features
‘There’s going to be no rules’: Hollywood tests new ways of releasing movies in a pandemic
737 views

Special Features
Digital theater is all the rage, but could it destroy the live stage?
911 views