DS The Evolution: A Latin Urban Duo on the Rise 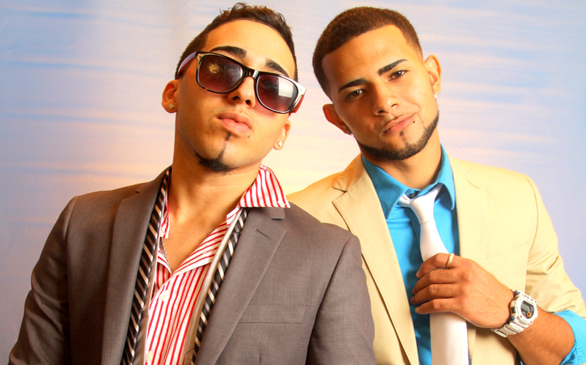 Caddy Marz and Jeff Marz, of urban music duo DS “The Evolution,” were born in New York. They carry Dominican and Puerto Rican roots, and they depict their culture while fusing hip-hop, reggaeton, bachata and merengue in their music.

Born Christopher Marrero and Jefrey Liranzo, Caddy and Jeff have been together since the mid 2000s. Since then, they’ve generated a lot of buzz throughout Latin America and within the U.S. with their songs “Te Vas Fatal,” “Como Un Loco,” “Cama y Mesa” and “Tu Perfume.” They’ve also recently released “El Bebé.”

Currently, the duo is working on its next project, due in 2013, that’s titled Bachata Chronicles.

Despite his busy schedule, Caddy, 23 and a resident of Charlotte, managed to give Campus Circle an interview. Here’s what he had to say:

Campus Circle: How did you guys become a duo?

CC: Can you tell us what the name means?

CM: DS stands for Dominican Soldiers. Our families are Dominican, and "Soldiers" is for us. We're hard workers with our music.

CC: In your words, can you describe your style of music?

CM: Some people refer to it as “duo urbano.” We wanted to create a new style of music. That's another reason for our name. We aim to evolve into a new style.

CC: What can you tell us about the concept of your album The Last Revelation?

CM: Well, we started off singing reggaeton. Then we decided to evolve, and we began fusing reggaeton with techno and cumbia with different sounds. We also use a bit of dubstep. We aimed at more of an “urbano” concept.

CC: Do you think that the future of the music industry is geared toward blending different music styles?

CM: Yes. Everything is more modern these days. Music is going to change regardless – the beats and all of that. That's our personal goal, to fuse different sounds. And yes, we feel that's the future.

CC: What can you tell us about your inspiration for your music?

CM: I've had a lot of experiences with relationships. I've been heartbroken and all these types of things. I've had to live through these things, and I feel that by sharing these experiences, I can help people who have had to go through similar situations.

CC: Obviously within your music, we hear bachata, R&B, maybe some pop and other genres. Growing up through the present, what have been your musical influences?

CM: I had some family members involved with music. Two of my uncles were musicians in the '80s; I grew up seeing them play instruments. One of them used to be in a merengue group, and my mom would take me to see their shows. I've always liked listening to a lot of different music, like rock, hip-hop [and] reggaeton. I used to listen to Daddy Yankee when he was called Winchester. I also listened to bachata and other typical Dominican music.

CC: What do you do with your free time?  Tell us about some of your hobbies.

CM: I like writing music, seeing different artists, playing basketball and watching it as well: playing all sorts of sports. I also like spending time with the guys and my family. I also love playing PS3. I just got the new Black Ops, and it's fire.

CC: What's on your agenda for the remainder for the upcoming year? Tours? Are you guys planning on coming back to L.A. anytime soon?

CM: We're going to L.A. in the beginning of next year. I believe my manager said January or February…We also plan on going to Honduras in April. Right now, our main focus is the Dominican Republic.

CC: Is there anything else you would like to add?

CM: Yeah, we have a new album coming out called Bachata Chronicles. Also, for people interested in music, you have to work hard and be consistent. It's not easy. Also, never stop pursuing your dreams; they do come true. Our dreams are coming true right now.

CC: When is the new album coming out?

CC: Are you guys currently working on it?

CM: Yes. It will be a CD full of bachata. We're Dominican, and we want to show people a part of our culture.

For more information on DS "The Evolution," visit www.dstheevolution.com.