In a Hurry-Up World, These Movies Take Their Sweet Time 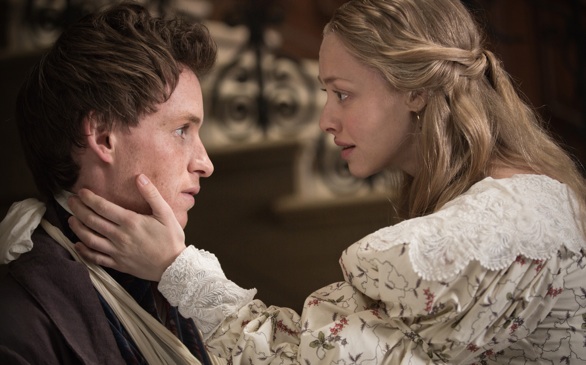 LOS ANGELES _ You can fly from Los Angeles to Seattle in less time than it takes to watch The Hobbit: An Unexpected Journey. Elite runners can finish a marathon faster than the total time of Django Unchained. And you can roast and carve your Christmas turkey quicker than going to see Les Miserables.

Daily life may be swinging toward two-minute YouTube videos and brutally succinct tweets, but there's still one place where time practically stands still: the multiplex. Extra-long films have proliferated this holiday season, a consequence of "final-cut" directors who wield near unilateral control over their films' running times and digital filmmaking tools that allow for longer and repeated takes.

Some movie theater owners say the current crop of long-winded movies are costing them at the box office, as films approaching three hours in length can be shown only once an evening. To squeeze in extra showings, some are forced to book fewer films, giving ticket buyers fewer options.

Exhibitors and more than a few movie critics have bemoaned this spate of prolonged productions. Yet some members of the most important constituency in the film business say the long films don't really feel that time-consuming.

"It never lagged," said 12-year-old Jesse Serrato, who joined his family for the 169-minute "Hobbit" movie last week in downtown Los Angeles and clearly has more fortitude than many adults. Added 15-year-old Jeremy Saborio: "It should have been even longer."

The young men are not alone: In a recent online survey conducted by the ticketing company Fandango of more than 1,000 moviegoers, 78 percent of the respondents said they feel long movies give them "more bang for their buck."

The epic running times haven't hurt some of these long movies at the box office. Skyfall has garnered domestic ticket sales of $272.6 million, Dark Knight Rises took in $448.1 million in North American theaters and Lincoln has grossed $108.5 million domestically.

But those outsized revenues have largely come from megaplexes, where theater owners can utilize more screens for a hit film. The operators of smaller complexes say they don't have that latitude, and are consequently suffering.

Ted Mundorff, chief executive of the 229-screen Landmark Theatres, said that when movies exceed a little more than two hours, exhibitors lose a showtime a day _ at a cost of about $3,600 per theater per night. With an average-length movie, Mundorff can book about five showings a day, with two in the sweet spot between 7 and 9:30 p.m., when theaters generate about 80 percent of their business. But movies like The Hobbit can be shown only four times a day, with one prime-time screening.

"We know there's going to be a cap at our box office," Mundorff said, adding that running times this holiday season are "way worse" than in previous years.

Rafe Cohen, president of the 126-screen Galaxy Theaters that are mostly in smaller California and Nevada cities, said he is having to make some Solomonic choices in terms of what films he can book _ to accommodate demand for a popular long movie like The Hobbit, he may have to bump a movie that's been in theaters for a few weeks. So a film like Rise of the Guardians or Life of Pi that is still doing modest business, for instance, may get bounced.

Traditionally Hollywood's longest movies were historical epics such as Gone With the Wind and Lawrence of Arabia, and running time was synonymous with prestige. But now even genre films have grown longer thanks in part to digital filmmaking tools that enable directors to work faster and cheaper but sometimes with less narrative discipline, according to Jan-Christopher Horak, director of UCLA's Film & Television Archive.

When filmmakers used real film, directors shot roughly 40 minutes of footage for one minute of screen time, Horak said. Now shooting ratios are closer to 200 to 400 minutes shot for every one minute on screen, because crews are no longer concerned about wasting costly film stock.

"There's a kind of overkill at work here," Horak said. "Film directors have this mistaken notion that digital is free, so they shoot a lot more footage. And they're in love with what they shoot."

Many of this year's longer movies come from filmmakers who have racked up enough clout with their studios to win the running-time fight, like This Is 40 director-producer Judd Apatow, whose comedies Bridesmaids, Knocked Up and The 40-Year-Old Virgin were box-office hits for Universal Pictures.

But, at almost an hour longer than most comedies, This Is 40 has inspired some in Hollywood to refer to the movie as This Is 40 Minutes Too Long.

"It's hard to get out of the house to go the movies," Apatow said of his movie's long running time. "Movies are expensive, parking is expensive _ why is everyone in a rush to go home? An extra 15 minutes won't kill you. Everyone thinks everything is like a two-minute YouTube video. And I refuse to adjust for them."

An early draft of Tony Kushner's script for Lincoln weighed in at 550 pages _ enough to make a miniseries. Steven Spielberg's film ended up at a still long but more movie-house friendly 2 1/2 hours. Producer Kathleen Kennedy said audiences are increasingly showing an openness to extended tales, citing binge TV viewing and plans to release all 13 episodes of the Netflix-produced series "House of Cards" in one block in February.

"I would like us to break free of the artificial boundaries of storytelling," she said. "The audience is prepared to accept the fact that the form will fit that time."

In the case of The Hobbit, critics derided the adventure movie as unnecessarily padded. The Los Angeles Times' Kenneth Turan wrote that an opening scene "goes on and on and on." A headline from the satirical news site the Onion read, "The Hobbit To Feature 53-Minute-Long Scene Of Bilbo Baggins Trying To Figure Out What To Pack." But audiences awarded the nearly three-hour fantasy an average grade of A, according to market research firm CinemaScore.

For producer Bill Mechanic, the best measure of how long a movie should be isn't industry convention but audience behavior. Mechanic, who was running 20th Century Fox when the studio released Titanic in 1997, recalled a test screening of the more than three-hour film in which only three people in an audience of 150 went to the bathroom.

"Does it make the audience restless or are they lost in the story and they don't care?" Mechanic said. "Are they fidgety? Do they like it? A movie is only as long as it feels."
___
Los Angeles Times staff writer Amy Kaufman contributed to this report.
___
(c)2012 Los Angeles Times
Visit the Los Angeles Times at www.latimes.com
Distributed by MCT Information Services