USC's Unfinished Business Has Left More To Be Done 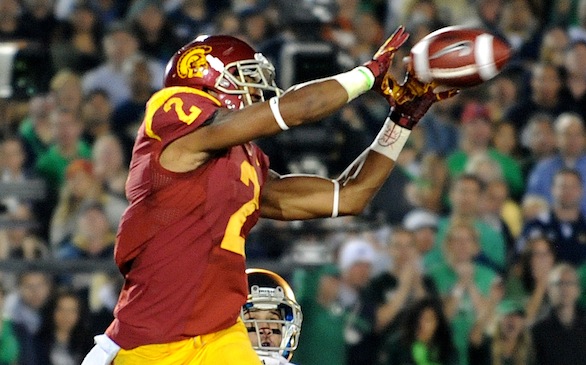 USC's embarrassing performance has left top talent running into the arms of the NFL. Following USC's 21-7 loss to Georgia Tech, wide receiver Robert Woods announced he will forgo his senior year and enter the 2013 NFL Draft. Cornerback Nickell Robey said he will make his decision by Thursday.

In their last gasp for air, USC took the field on Monday morning looking to salvage what was left of their season. To the Trojans, a win at the Sun Bowl would erase the bad memories they acquired throughout the year. Unfortunately, the Trojans performance was as disappointing as their season.

The Trojans took a big blow earlier in the week when head coach Lane Kiffin announced that senior quarterback Matt Barkley would not be playing. All eyes then quickly shifted to freshman quarterback Max Wittek who was 14-for-37 for 107 yards; he threw three interceptions. He averaged a mere 2.9 yards and one touchdown, which arrived in a performance he surely can't wait to forget. When looking at the stats, it's hard to believe any points were put up since Wittek was the only player to pass and/or rush for more than 100 yards.

USC wide receivers Marqise Lee and Woods proved ineffective as both wide outs combined for a shocking 74 yards receiving. Ironically, that wasn't due to Georgia Techs aggressive corners, but the lack of play calling where they would potentially get the ball. Lee only had six catches, as Woods racked up less catches then there are quarters in a football game.

USC's normally explosive offense was absent, as their lack of emotion and energy was put into question once again. Ineffective drives and three-and-outs left players on the sideline looking as if they were waiting at the terminal for a delayed flight. That same nonchalant expression was present during the Trojans' last six games of the season. With this loss, Kiffin falls to 0-11 when trailing at the half and will undoubtedly be bombarded with questions about his return next season.

The Trojans lost six of their last seven games, and they are the first AP preseason No. 1 team to do so. Things only get worse for the Trojans as their top players look to take their talent to the pros instead of wasting it on a program that seems to be lost.

Expectations were high this season, and to say USC failed to meet them is an understatement. No one expected the Trojans to be 7-6, following a 10-2 record the season before. Silas Redd told reporters that he apologizes to the fans, while Kiffin told reporters, "Obviously we have to work harder. Obviously we need to coach better."

"Obviously" doesn't begin to explain all the work Kiffin has cut out for him next season. The only thing positive to take away from this game is that running back Silas Redd will stay for his senior year, and Lee is ineligible to declare for the draft, and that means Lee will play for USC next season.