Pop Culture Online: The Internet's Influence has Never Been Greater 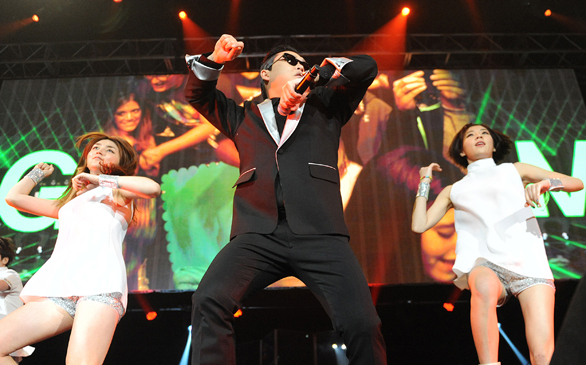 A canceled TV show with a devoted fan base comes back to life. A video game changes its ending. A comic turns her personal tragedy into unexpected fame.

Welcome to the world of online entertainment, where the interaction between fans and artists created a whole new dynamic in 2012. Ever-evolving technology and the subcultures that grow up around it resulted in some of the year's most fascinating stories on the Web and social networks.

There were the usual attention-grabbing fare that got millions of clicks until the next big thing happened -from Whitney Houston's death to the rise of Honey Boo Boo.

But other stories had deeper implications because they shined a spotlight on the interactive digital landscape. We selected 10 that caught our attention in 2012; some focused on a celebrity or a personality, others on websites or trends.

What happened: Little-known South Korean rapper Psy released a music video for the single "Gangnam Style" on his official YouTube channel and within two months it became the most-viewed video ever on YouTube.

The result: Psy takes America by storm, appearing on numerous TV shows and even getting "Meet the Press" host David Gregory to dance on live TV.

Why it matters: The subject of "Gangnam Style" - the lifestyle of those living in an upscale neighborhood in Seoul - had little relevance to audiences outside of South Korea, but the song quickly became an international sensation anyway. (Psy's goofy little horse dance probably had a little to do with it.) But just as Star Trek fans were able to instantly compare the differences between the American and Japanese versions of the Star Trek Into Darkness teaser when all were released online, this video demonstrates that the Internet is rapidly blending pop cultures into one.

What happened: During a stand-up set at the club Largo in Los Angeles, comedian Tig Notaro wandered away from her planned material and did a 30-minute set about being diagnosed with breast cancer. Comedian Louis C.K., who was present, tweeted that it was "masterful," then later made the set available on his website for $5 a download.

The result: Notaro, 41, became an almost overnight sensation after the August show. Famous comedians who attended praised her to their Twitter followers. In October, Louis C.K. made the set available to all, using the model he'd set up for his own stand-up special that bypassed major label distribution. Sales of the set were high enough to have landed it at No. 3 on the Billboard charts if self-distributed recordings were counted.

Why it matters: Though big stars such as Louis C.K. and the band Radiohead have been able to self-distribute their work to a pre-built fan base, Notaro showed you could move product and gain a following purely through online word of mouth.

What happened: The website for crowd-funded projects such as video games, albums and prospective products has been around since 2009 but really came into its own this year. All 10 of its highest-funded projects happened in 2012. The top was the $10.2 million raised for the Pebble watch, a smartwatch designed to sync with an Android or iPhone that features an easy-to-read e-paper screen.

The result: Video games are the big winners, with seven of the top 10 involving game-related technology.

Why it matters: Developers with high profiles in the online gaming world, such as Chris Roberts, creator of the "Wing Commander" series, were able to bypass game publishing companies. As Roberts noted on his website, "Star Citizen," the biggest crowd-funded video game in history, with just more than $7 million raised from 101,000 people, will "cost less, be more creatively pure, and, most importantly, be built for the real core audience - not some corporate suit worried about including all the casual gamers."

What happened: Six years after the beloved but ratings-challenged comedy series was canceled by Fox, the show did the near impossible: It reassembled the original cast to film a new season for Netflix, the online streaming film and TV giant. Production began in August for a 10-episode season.

Key stats: More than 500,000 mentions on Twitter, including a spike when production began.

The result: Excitement was so high that the number of episodes ordered was raised to 12 to 15. The show will premiere on Netflix in early 2013.

Why it matters: Netflix, which had started streaming original content with the mob comedy "Lilyhammer" in February, is seen as a savior for beloved yet low-rated shows. The broadcast networks may be struggling for ratings, but TV viewing is surging online. More than 60 percent of Netflix's streaming views are for TV shows, and subscriptions to online TV provider Hulu Plus top 3 million.

What happened: A short online film created for the nonprofit organization Invisible Children to promote its crusade to bring Ugandan cult and militia leader Joseph Kony to justice became an unlikely viral sensation, despite its grim subject matter.

The result: The capture of Kony became a cause celebre despite criticisms about the film's inaccuracies and simplifications, and the issue was embraced by politicians in Washington and elsewhere. Kony, however, remains at large.

Why it matters: "Kony 2012" showed that viral video was not just about instant fame and pop cultural curiosities but could spur social action. However powerful the viral video may be, it remains an elusive prize, as the creators of "Kony 2012" realized when their follow-up, "Kony 2012 Part II - Beyond Famous" failed to catch on.

What happened: Three years after Brown pleaded guilty to felony assault on then-girlfriend Rihanna and was ordered by the court to remain at least 50 yards away from her, the couple apparently resumed their romance in plain sight, sending loving messages to each other through Twitter and Instagram.

The result: Speculation about the pair's romantic - if that's the right word - future remains a hot topic on social media.

Why it matters: It's a reminder that social media allow an unprecedented level of interaction between celebrities and their fans. Twitter can boost a celeb's profile, but it can also create many messes, such as Brown's R-rated Twitter feud with comedian Jenny Johnson.

What happened: "Mass Effect 3" was one of the most highly anticipated games of the year and sold more than 1.3 million copies the month it was released. However, fans were greatly let down by the final moments of the trilogy's concluding chapter. So a grass-roots effort was launched to urge game developer BioWare to issue a new ending while raising money through an online fundraising site for the charity Child's Play.

The result: The outcry worked and two weeks after the game's release, BioWare posted a statement on its website informing fans that it was working to address their concerns. A free, downloadable ending was released three months later.

Why it matters: Though audience disappointment often leads to companies altering the artistic content of their products in various ways (director's cuts, special editions, etc.), the organized and near-instantaneous reaction to "Mass Effect 3" was possible only through the proliferation of message boards and online fundraising. Creators can defend their artistic rights, but few companies will risk alienating a highly organized fan base.

What happened: Two videos uploaded to YouTube, "The Real Life of Muhammad" and "Muhammad Movie Trailer," which served as trailers for a longer project titled "Innocence of Muslims," sparked outrage in the Muslim world. Protests in several countries led to multiple deaths and the California filmmaker who made it was sentenced to death in absentia in an Egyptian court.

The result: After a deadly backlash, YouTube blocked the offending videos in multiple countries, including Egypt, Libya and Saudi Arabia. The video can still be viewed in the United States; however, filmmaker "Sam Bacile" (aka Mark Basseley Youssef) was arrested in the U.S. and sentenced to a year behind bars after pleading guilty to violating the terms of his release from an earlier conviction for an unrelated matter.

Why it matters: The same borderless reach of YouTube that allowed Psy to become an international sensation also allowed freedom of speech in one country to inflame anger in another part of the world. YouTube and parent company Google found themselves mired in international laws and arguments about Internet censorship at home.

What happened: Maker surpasses Machinima to become the No. 1 independent YouTube network of channels, allowing amateur filmmakers to produce and distribute their shows and films.

Key stats: 5,000 channels with 140 million subscribers and more than 2 billion views a month.

Why it matters: After years of steady growth using YouTube and social media to market short form video content to the key youth demo, Hollywood and tech players are finally getting serious. Suddenly, the world of low-cost entertainment is getting an upgrade, with Maker completing work on a 40,000-square-foot production facility this year.

What happened: In July, the online streaming music service announced it had increased the number of active listeners nearly 50 percent over the previous 12 months. Despite the rapid growth, the company argues that its royalty payments are robbing it of profit.

The result: Pandora executives testified before Congress in November in support of the Internet Radio Fairness Act, which would lower the amount Pandora pays in royalties and bring it in line with what broadcast radio pays.

Why it matters: Pandora is now the third most popular form of music behind broadcast radio and CDs. Musicians are arguing against the legislation, as the growing form of music distribution is finally providing them money after years of lost income to illegal music downloading. As more and more streaming music services appear online, including a rumored music service from Apple in early 2013, the battle for profit and market share will become only more intense.