Pennsylvania Governor to Sue NCAA Over Sanctions Against Penn State 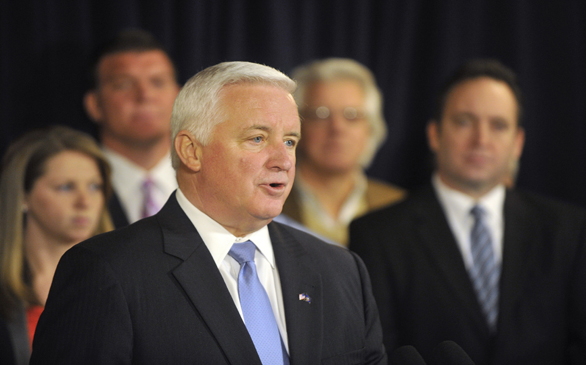 STATE COLLEGE, Pa. - The commonwealth of Pennsylvania will sue the NCAA over the sanctions imposed on Penn State resulting from the Jerry Sandusky child sex abuse scandal.

Gov. Tom Corbett will announce Wednesday that he is filing a federal lawsuit against the NCAA for its sanctions against Penn State, according to a news release from the Governor's Office.

Corbett will hold an 11 a.m. EST news conference Wednesday in the Alumni Fireside Lounge of the Nittany Lion Inn.

University trustee Anthony Lubrano also said he didn't have much information on the lawsuit.

"If true, I'm glad that the governor has finally come to agree with my point of view that the NCAA had no authority to intervene in this matter," he said Tuesday. "I do wonder why it took him so long to come to that point of view."

The NCAA levied severe penalties on the university, including a $60 million fine, a four-year bowl ban, a drop in the number of football scholarships the university can offer and the vacating of the football team's wins from 1998 to 2011. It's not been determined whether all the sanctions or portions of them are targeted in the suit.

Penn State in July accepted the sanctions and in December paid $12 million in penalties into an escrow account. University President Rodney Erickson accepted the sanctions claiming the alternative would be the "death penalty," so called because it would have completely closed down the football program for four years.

Erickson had said he was told of the NCAA's plans to levy a four-year football shutdown because of the role university leaders allegedly played in the hiding of accusations against Sandusky in 1998 and 2001.

State Sen. Jake Corman, R-Benner Township, announced last week that he plans to introduce legislation that would keep the NCAA's entire $60 million fine against Penn State in Pennsylvania. He also said he will file a lawsuit, seeking to prohibit the NCAA from releasing funds to any organization outside of Pennsylvania.

Corman, who attended the swearing-in ceremony for members of the state legislature Tuesday, did not return a call for comment.