Dropping Out of Heavy U 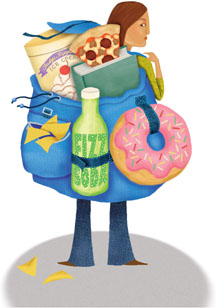 Untitled Document Throughout her high-school years, Christina Olson never really worried about her weight. She ate and exercised when she wanted and didn’t put on extra pounds.

So she didn’t think anything would change when she moved to Virginia to attend college.

But after her first semester, she came home to discover her old clothes didn’t fit as well.

Blame the "Freshman 15," that notorious bit of college lore that says freshmen will gain 15 pounds in their first year away from home.

Though it’s not hard fact, a few studies join nutritionists and college fitness experts in saying that, on average, students actually do gain weight in their first year away. It’s an average of 5 1/2 pounds before winter break, according to a 2003 study by Cornell University in New York.

The reason? It’s the many parts of a lifestyle change, said Judy Simon, a clinical dietitian at the University of Washington Medical Center Roosevelt clinic. It’s staying up late, snacking while studying, drinking beer and having irregular meals, not to mention a lack of physical-education classes and after-school sports, among other things, she said.

College students don’t give enough thought to nutrition or their weight when they’re ordering that meat pizza at midnight, she said. Nor do they think about the calories in beer when they go to a party.

One of the key reasons for freshman weight gain is emotional eating, Simon said.

When students get stressed, break up with a boyfriend or girlfriend or have a big test coming up, they often chow down on comfort food: cookies, chips, ice cream and anything else that can be found at the convenience store down the street, she said.

For Olson, who is now a senior, it was the cooking in Virginia: "They fry everything, and you can only eat so many salads," she said.

She said she also found herself staying up late and snacking, but she didn’t start worrying about it until she tried on an old swimsuit in preparation for a spring-break trip.

So Olson started looking for a way out.

And that’s a typical experience, Simon said. Though some students come to her before they start putting on pounds, she said she sees many of her patients only after the jeans stop fitting. "I don’t think the freshman 15 is inevitable, not everybody gains it, and not everybody has to," said Simon.

Levitsky, at Cornell, found in his research that if freshmen watch their weight, it keeps them from eating too much. Also, if they’re educated about proper portion sizes, they will be less likely to gain weight, he said.

There’s another danger, the experts warn: Some students become obsessive about their weight, and it turns into a control issue, Simon said.

Olson, for example, said her worries about losing weight for spring break led her to create her own diet. She started counting calories and signed up for a kickboxing class.

But she said she took it too far.

She told herself, "If I consume 1,000 calories a day, I should lose pounds in no time, but no time was taking too long," she said. She was down to 700 calories a day, and she started getting lightheaded at her kickboxing classes. She was becoming obsessive about weight loss and was developing an eating disorder, she said.

Simon suggests that students shouldn’t create their own diets, and she said they should try to stop obsessing about their weight or the calories they’re consuming.

"If there’s so much focus on your weight, then there’s definitely some other issues going on," she said.

Olson was fortunate to have friends who noticed that she wasn’t eating and helped her snap out of it. She said she finally realized that college wasn’t about being a certain size or looking good.

It was about getting an education.

"Front-load" calories: Don’t skip meals, especially breakfast. Eating a slice of last night’s leftover pizza is better than not fueling your body for the day. The idea is to take in calories before you need them, not afterward, when your body is drained.

Try walking: Walk to school if you live off campus. If you live on campus, make time for hiking, mountain biking or the gym – most schools have good exercise facilities.

Find alternatives to unhealthy food: Get pizza with less cheese and more vegetables. Order a nonfat latte. Ask for less rice with that teriyaki meal and more salad.

Drink less alcohol, more water: A 12-ounce beer has about as many calories as a 12-ounce soft drink. Carry a water bottle – it’s trendy, and being hydrated is part of being healthy.

Don’t go hungry: If you eat small, regular portions, you shouldn’t be hungry. Keep a healthy snack nearby.

Beware late-night meals: Studying late can mean your body will need an extra meal – calories you probably won’t burn off unless you add extra exercise the next day.

SOURCE: Judy Simon, clinical dietitian at the University of Washington Medical Center Roosevelt clinic, and David Levitsky, a professor of nutrition and psychology at Cornell University.