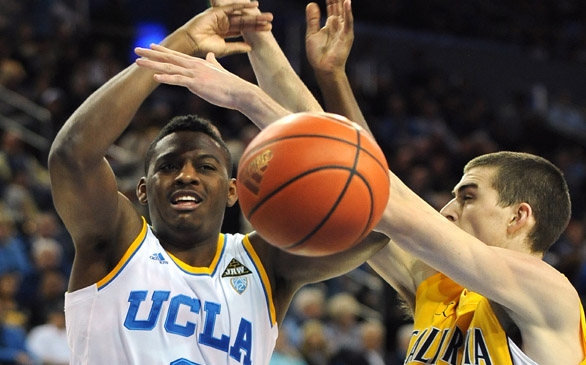 Shabazz Muhammad couldn't connect, missing left and right, long and short, anything and everything.

But with the final bell tolling, with momentum and a win slipping, and with unease spreading throughout Pauley Pavilion, the UCLA freshman delivered a knock-out blow.

"The guy's got ice water in his veins," Bruins Coach Ben Howland said after his team's 79-65 win against California in its Pac-12 Conference opener Thursday in front of a crowd of 9.406.

Indeed. Muhammad made a clutch three-point shot with 4 minutes 11 seconds left that pushed UCLA's lead back to double digits and helped seal its sixth consecutive win.

Muhammad finished with 16 points, but few of them - if any - came easy. This could be considered his first true off-night as a Bruin, as he hit five of 13 shots.

Before his clutch three, Muhammad had missed eight of 11 shots, an off-night for a player who averaged 23.2 points in his previous five games.

Moreover, California (8-5) had trimmed the Bruins' lead to as low as four points behind a flourish of baskets from former Los Angeles Price High star guard Allen Crabbe.

But following a short jumper and a pair of free throws from Anderson that pushed UCLA's lead back to eight, Muhammad spotted up and hit what proved to be a dagger.

Crabbe was fabulous, finishing with a game-high 21 points. He scored 10 of the Golden Bears' 14 points during a stretch when they threatened to overtake the Bruins.

UCLA came out of halftime with a 10-point lead, which it mostly maintained until California's late run.

The Bruins' defense was key, as it held California to 36 percent shooting from the floor (30 for 76). Larry Drew II was again steady, with nine assists and zero turnovers.

UCLA started slow, laying bricks (an 0-for-6 start from the floor) while Cal built a lead (6-0 out of the gates).

A hangover from an emotional overtime upset against then-No. 7 Missouri last week? Perhaps.

But then UCLA started to tighten up some loose screws, tying the score at 10, then taking its first lead on a Norman Powell three-point shot with 12 minutes, 49 seconds left.

From then on, you started to see the Bruins pushing it at the pace that produced 90-plus points in their last two games.

The Bruins did find some piece-of-cake transitions baskets, but they also missed their share, Muhammad especially.

Then, with the score tied at 21, UCLA found momentum, and ended the half on a 17-7 run to take a double-digit lead into intermission.

At that point, the Bruins' Big Three of Muhammad, Anderson and Jordan Adams had just 15 combined points, scant figures when you consider they average about 46 per game.

In other words, UCLA led by double digits without huge production from its stars _ a bad omen for the Golden Bears.

It's onto the next Pac-12 foe for UCLA, and in a conference that looks like it's up for grabs, these baby Bruins are looking more and more like they may be the ones to snatch the league title.