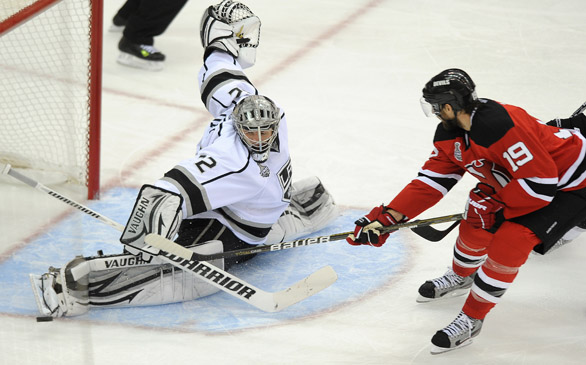 It could be a while until Los Angeles fans see Jonathan Quick and the Kings play at Staples Center.
(Credit: Wally Skalij/Los Angeles Times/MCT)

Collective bargaining talks between the NHL and the players' association took a potentially bleak turn Thursday as the union began polling members for a second authorization to file a disclaimer of interest, which could lead to the union's dissolution and allow players to file antitrust lawsuits against the league.

The NHLPA, which allowed the deadline for its first disclaimer filing to expire Wednesday while it continued bargaining, also filed a memo in U.S. District Court in New York asking for a dismissal of the class-action suit the league filed Dec. 14. The NHL contended that the union's consideration of a disclaimer was a bargaining maneuver and that its lockout should be declared legal. Representatives of the league and union are scheduled to appear in court before Judge Paul Engelmayer on Monday.

Players reportedly became angry when the NHL proposed softening penalties against teams that misreport hockey-related revenue, and the league withdrew that proposal.

However, the union moved to start another disclaimer authorization vote. The process will take 48 hours and requires two-thirds approval from members. The first disclaimer vote passed overwhelmingly.

"In plain English, the union would like this dispute to be litigated in a court of its choosing if the collective bargaining process fails," Daniel Lazaroff, a professor at Loyola Law School who specializes in sports labor law matters, said of the NHLPA's legal moves.

"It seems inevitable that the union will disband if no CBA is negotiated and the season is canceled. The likely next step would be an antitrust suit that would test the scope of the nonstatutory labor exemption and perhaps reach important substantive antitrust questions. The NHL would like those issues in the 2nd Circuit; the players not so much."

Players and NHL negotiators had a second session Thursday, but their discussions were focused solely on their differences over funding the players' pension plan, a key stumbling block. The sides are scheduled to meet again Friday.

Commissioner Gary Bettman has said a new labor deal must be in place for training camps to open Jan. 12 and the season to start Jan. 19 or he will cancel the season for the second time in his tenure.