Lakers, and D'Antoni, Are Flunking Chemistry 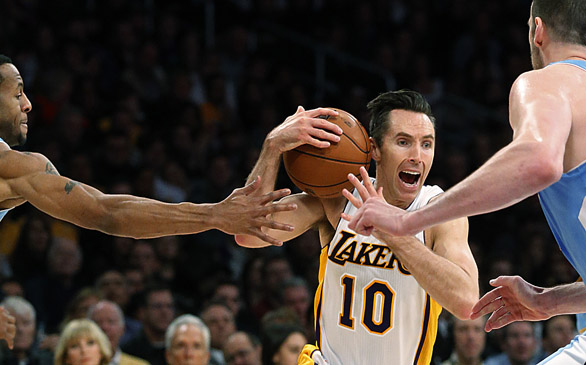 It was an odd thing for the coach of Team Dysfunction to say.

His star players have repeatedly exchanged angry glances and gestures, a 7-footer has griped about being misused, a reserve has openly complained about not being used at all ... and somehow none of it explains the Los Angeles Lakers being three games under .500?

"I understand it a little bit," Lakers coach Mike D'Antoni said of his team's chemistry concerns before things worsened with a 112-105 loss to the Denver Nuggets on Sunday at Staples Center, "but everybody has a job to do. The only thing we can ask players is to play as hard as they can. Whether you're happy or not doesn't really matter if you are playing as hard as you can."

D'Antoni unfortunately had more to say.

"You don't have to love each other," he said. "I've been on a lot of championship teams in Europe where there's edges and we don't go out to dinner every night. That is not why we're losing. We're losing right now because we don't have a consistent 48 minutes of good basketball."

They also can largely be a function of wanting to play for your coach and take the court with your teammates, even when you are headed toward potentially being one of the biggest flops in NBA history.

"We're not one right now," Dwight Howard conceded after grabbing 26 rebounds that proved meaningless, "and we have to get to that place where we're one as a team and move forward together."

The Lakers have exhibited such indifference toward each other that no one came over to help Jordan Hill when he fell down against the Los Angeles Clippers, prompting Dwight Howard to plead for togetherness after in the locker room.

Two days later, four players sprinted to help Howard up when he was prone. Howard also made a point of giving Kobe Bryant a hand up off the floor.

Too little, too late?

"A small piece of energy like that, running to help somebody up, lets you know that they have your back," Howard said. "It's a small thing but it means a lot."

For too much of this season, the Lakers have taken a hands-off approach toward each other, and the team's record is a reflection of the obvious discord.

You think being old and slow is the reason these guys aren't getting back on defense? It's more a result of them caring more about playing the blame game than being there for each other.

That's why Bryant and Howard sniped at each other about defensive rotations in New Orleans. And it's why Howard and Steve Nash traded what-were-you-thinking looks in Denver after JaVale McGee blew past them for a dunk.

Calling each other out in the hope of getting better is one thing. These guys have the look of teammates who genuinely don't much like each other.

D'Antoni has not exactly played peacemaker beyond a get-to-know-you dinner with Pau Gasol that did little to soothe the heartburn the power forward has experienced from being kept so far from the basket during games.

The team needed another airing-out session Saturday after Gasol disappeared against the Clippers on Friday. D'Antoni said promises were made to use Gasol more as a facilitator and put him in preferred spots on the court.

It helped for all of one half. After scoring 11 points in the first half, Gasol went scoreless in the final two quarters before his night ended with a McGee elbow to the nose.

Reserve Antawn Jamison also continued to be a nonentity, after he complained about D'Antoni's failure to talk to him about why he wasn't playing.

Jamison played four minutes Sunday, making one of two shots before finding his way back onto the bench.

When asked before the game about whether opening a dialogue with D'Antoni about his situation had helped, Jamison said, "Ask him. Not on my end. Nope."

If admitting you have a problem is the first step, at least Howard is on the right track.

"We have to chip away at it," Howard said. "It's not something that happens overnight."

It's something that may never be resolved if D'Antoni continues to sleep on the issue.