Gangster Squad: Not Your Father's Typical Gangster Movie: Win a $100 Gift Certificate and a Gangster Squad Gift Pack! See Below for Details. 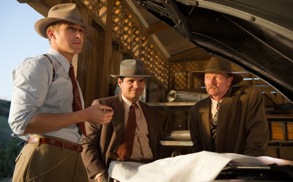 Director Ruben Fleischer takes an exciting turn with his latest film, Gangster Squad. Having previously directed comedies like Zombieland and 30 Minutes or Less, Fleischer has jumped out of his comfort zone to bring audiences something new.

Gangster Squad takes place post-World War II in 1949 Los Angeles. Brooklyn-born Mickey Cohen (Sean Penn) is running the organized crime syndicate with a desire to expand his empire. Cohen’s power appears unstoppable; he even has police officers and government officials under his influence. This is until we meet a very determined Sgt. John O’Mara (Josh Brolin) and Sgt. Jerry Wooters (Ryan Gosling) who conspire to create a small, secret police task force hell-bent on bringing Cohen down. With a stellar all-star cast of Emma Stone, Anthony Mackie, Michael Peña, Giovanni Ribisi, Nick Nolte, Mireille Enos and Robert Patrick, this film has an air of gravitas.

Writer Will Beall, a former police officer himself, was drawn to this real life story and wanted to share it with the public. He collaborated with producers Dan Lin and Kevin McCormick, who were all in agreement that Fleischer was the right director for the film.

Fleischer added, “I had a lot of learning to do coming from a comedy background. The authenticity of the cast really helped, and I got to stretch my legs while making it as entertaining as possible.”

According to Brolin and Fleischer, the entire cast was easy to work with and a joy to have on set.

“We had an amazing cast…a lot of those guys are lead guys, and they did these smaller parts,” said Brolin. “The guys were so much fun and absolute chaos.”

“I feel really lucky to work with so many talented people, and everyone was pitch perfect,” said Fleischer. “There was a lot of camaraderie among the actors, and sometimes I felt like a school teacher trying to control the cast!”

The opportunity to work with Penn (Milk, I Am Sam, Mystic River) was both exciting and nerve-wracking for the director.

“I was really nervous to work with Penn because he’s one of the greatest actors, and I promise you, I did not get a lot of sleep the night before our first day of shooting,” said Fleischer. “However, he was so collaborative and generous and brought so many ideas to the character and the film.”

Stone has been known to perform well in all sorts of films, including comedies (Easy A), dramas (The Help) and even action movies (The Amazing Spider-Man). In Gangster Squad, she proves that she can fit in a crime thriller as the lovely Grace Faraday, the woman who falls for Gosling’s character.

“My character wasn’t based on a real person, which was a lot of pressure as a jumping off point,” said Stone. “She ultimately became famous because she was on the arm of someone really notorious.”

The cast’s costumes played an important role in making the film an accurate portrayal of the era. While Stone got to wear glamorous outfits and shine like a beauty, the men weren’t so lucky.

“My higher voice was more of a wardrobe issue, and the wool was quite itchy. I channeled my hatred of the outfit into the gangsters,” joked Gosling.

“We really wanted to bring the glamour of L.A. at that time to life,” expressed Fleischer. “When they put on their suits and hats, it instantly transformed them into the period.”

Gangster Squad contains fight scenes that required a lot of practice and patience. The fight scene between Brolin and Penn did not include any stunt doubles, so the pair had to go at it for hours.

“The fight scene with [Penn] was really tough, and we rehearsed for many, many weeks, and that was most challenging for me,” said Brolin. Adding to that, Fleischer said, “We shot that scene over the course of three nights and shot from midnight to 6 a.m. with no stunt doubles. It was wet and cold, so kudos to [Brolin and Penn].”

In the end, Fleischer’s goal with Gangster Squad was to show audiences how this task force made a difference and put a stop to corrupt cops and mobsters from taking over L.A. Needless to say, he accomplished it.

“This movie is about people standing up for their beliefs and doing what is right - a celebration of these cops who rid L.A. of organized crime,” said Fleischer. “We’ve never had organized crime since they got rid of Cohen. I really wanted to honor the memory of these officers who didn’t let corruption take over their city.”