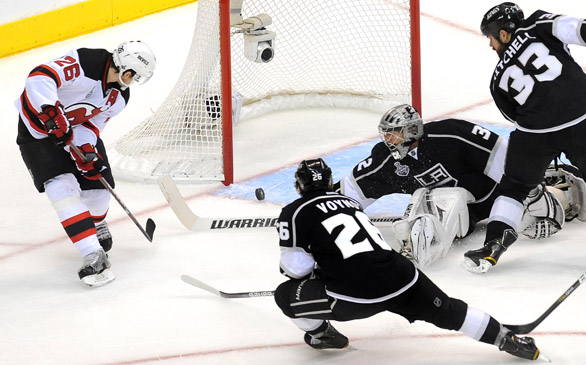 The Los Angeles Kings could soon be back on the ice at Staples Center.
(Credit: Wally Skalij/Los Angeles Times/MCT)

Los Angeles Kings fans had waited 45 years for their beloved team to win the Stanley Cup last June, so it seemed cruel that a labor dispute between the National Hockey League and the NHL Players' Association delayed their chance to see the Kings raise their championship banner at Staples Center.

Their wait is now near an end.

The league and players' union early Sunday announced a tentative accord on a new collective bargaining agreement that will bring up to 10 years' labor peace to a league that has shut its doors three times because of conflicts. The agreement, reached with the help of a federal mediator after a tricky 16-hour day of negotiations, has some loose ends that must be wrapped up before it's put on paper and voted upon by both sides this week.

"The framework of a deal has been agreed upon," NHL Commissioner Gary Bettman told reporters at a news conference held in New York shortly before 6 a.m. Eastern.

Timing for the ratification process hasn't been determined. After both sides give their expected approval, the NHL will announce a revamped schedule in which teams will play 48 or 50 games, instead of 82, within their respective conferences. The Kings' crowning moment - raising their banner to the Staples Center rafters - is likely to occur Jan. 19.

"We're going to be hanging our banner and giving some championship rings out and we're going to try to do it again," said a jubilant Tim Leiweke, the Kings' governor and the president and chief executive of their parent company, AEG.

"That's more important than having any anger over what just happened. That was not in our control. Now, our journey continues."

The NHL locked players out on Sept. 15 after claiming teams could not operate profitably while paying players 57 percent of hockey-related revenue they received in the final year of the previous labor deal. With the aim of ending long-term, front-loaded contracts that circumvented the spirit of the salary cap, the NHL proposed severely limiting the length of players' contracts and toughening terms of free agency. Its initial offer stipulated that players would get 43 percent of hockey-related revenue.

In trying to reduce players' share of revenue, the NHL followed the path of the National Football League and National Basketball Association, which endured labor problems in 2011. The NFL didn't miss any regular-season games, but the NBA dispute lingered until Christmas 2011 and led to a schedule of 66 games instead of the usual 82.

This was the NHL's third lockout during Bettman's nearly 20-year tenure. The league previously cut the 1994-95 season to 48 games and canceled the entire 2004-05 season.

This disagreement pitted Bettman against NHLPA Executive Director Donald Fehr, the former leader of the Major League Baseball Players' Association. They butted heads often and each side accused the other several times of being unwilling to negotiate in earnest. The league believed Fehr was slowing the process in an attempt to wear owners down; the union believed Bettman wanted to take back many contractual rights players earned during previous disputes.

The disagreement was resolved only after several influential club executives - including Leiweke, Pittsburgh Penguins owner Ron Burkle and representatives of the Montreal Canadiens and Tampa Bay Lightning - began pressuring Bettman two weeks ago to kick-start the stagnant negotiations. Bettman presented a proposal Dec. 27 that launched intense bargaining sessions. The work of federal mediator Scot L. Beckenbaugh, who acted as a go-between when the two sides couldn't face each other, also was crucial to the resolution.

The salary cap for the 2013-14 season was set at $64.3 million, well above the NHL's proposed $60 million but short of the union's target of $65 million. The floor - the minimum each team must spend on payroll - will be $44 million. The salary cap for the upcoming season will be a prorated portion of the previously agreed-upon $70.2 million limit. Teams will be permitted to buy out two players' contracts before the 2013-14 season without that money being counted against their salary cap.

Other pivotal elements, such as a 50-50 split of hockey-related revenue and keeping the same terms for entry-level contracts and free agency, were previously negotiated. Some issues, including players' participation in the 2014 Winter Olympics, in Sochi, Russia, have not been settled.

"Hopefully, in a few days people can start watching people who are skating and not us," Fehr told reporters in New York.

Many players who had signed with European teams to stay in shape during the lockout began scrambling to arrange transportation back to North America after the tentative agreement was announced. Kings captain Dustin Brown said he planned to fly home from Switzerland on Monday, and center Anze Kopitar - who sprained his right knee in a game for the Swedish team Mora IK on Saturday - was expected back in Los Angeles on Wednesday.

A resolution was never certain, even during the final days of talks. Tempers flared on Thursday, when the league introduced language that would have reduced penalties against teams that under-reported their hockey-related revenue, and players remained angry after the NHL withdrew that provision.

"It felt like driving your car on the edge of a cliff. We could still get to where we had to go, but at any moment we could fall off the edge," said Kings forward Kevin Westgarth, a member of the players' negotiating committee and participant in those final sessions.

"We are all extremely happy to have made it over the hill. It's going to be a quick change out of our suits and into our skates, as well."