Simon Wiesenthal: The Conscience of the Holocaust 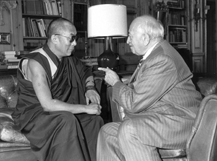 Untitled Document Thousands of Nazis that took part in mass murders still live in freedom – and the late holocaust survivor Simon Wiesenthal spent his life trying to find them. The legendary Nazi-hunter recently died on Sept. 20, and will be remembered through a special exhibit at the Museum of Tolerance featuring photographs, artwork and artifacts that document the life of a man who survived the brutal beatings and forced starvation inflicted upon him by Nazi soldiers.

No one could have guessed the young Wiesenthal (born in 1908 near what is now the Ukraine) would live on to help prosecute 1,100 Nazi war criminals including Adolf Eichmann, Hitler’s chief of "Jewish issues" and the "Final Solution." Once an architect, but forever a hero, Wiesenthal even put off his career to trace Holocaust accomplices like the police officer who arrested Anne Frank’s family just to prove to the world the girl’s tale was true.

The story that at one time the "the world didn’t want to know" will continue to be told through more than 200 heart-wrenching images showing naked Soviet Jews before their execution and the railroad cars that transported them to slaughter at Auschwitz. Recent photos show Wiesenthal handling civil rights business with leaders such as President Reagan and the Dalai Lama.