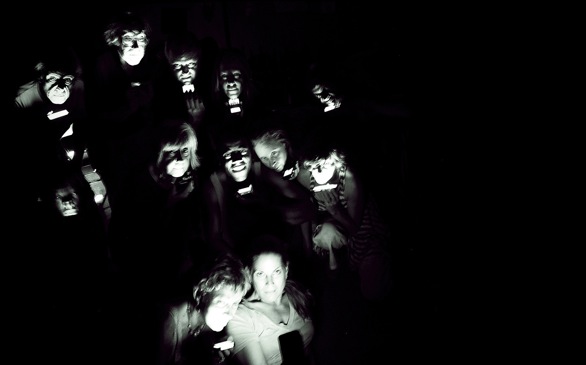 "Beyond Dark" is an unique performance where the audience is completey bathed in darkness.
(Credit: Vesna Hocevar)

Remember when you were a kid and you loved to imagine? Remember a time when game consoles and sensational television shows didn’t dominate every crevice of your senses? If the answer is yes, then good for you – no one cares. If the answer is no, then go to the Odyssey Theatre and watch “Beyond Dark” to remind yourself of what it was like to have your senses heightened and let your imagination run wild.

No one knows the dark quite like the Odyssey Theatre’s artistic director, Sally Essex-Lopresti and producer Ron Sossi. “Beyond Dark: The Best of Theatre in the Dark” immerses you in darkness similar to – if not blacker than – that of a North Carolina night as the actors act out short plays.

This scary talented cast is guided by an elaborate maze of wires on stage. You hear booming, roaring and sometimes pitter-pattered sounds. Different scents sweep through the audience. The smell of lit sage nauseated me, but the scent of familiar objects (including chocolate truffles and strawberries) and the tastes of other delicacies comforted me, especially after being forced into blindness.

My favorite of all the short stories portrayed was “The Tell-Tale Heart,” with actor Cary Thompson as the murderer and actor Alan Abelew as the old man. For those of you unfamiliar with this Edgar Allan Poe short story, it is about a very nervous man who decides to kill an old man simply because he hates his horrible eye, which is pale blue with a film over it. The murderer believes this act will free him. This story was portrayed terrifically.

Overall, the cast of “Beyond Dark” re-introduces you to a world we have always lived in: A place where all of your other sense are forced to work double time since your memories of the visual world begin to fade, and your mind and eyes fight the dark. It is an unforgettable experience.

For more information on "Beyond Dark," visit odysseytheatre.com.