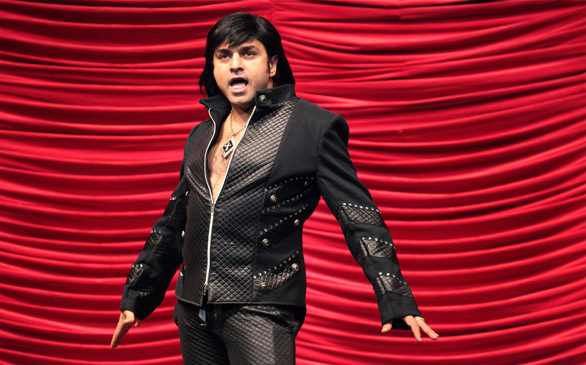 For any comedian, it’s not easy making people laugh while on stage. However, Ariel Miramontes has strived to do so for quite some time now.

“It’s not an easy thing to stand on a stage and try to make people laugh,” said Miramontes in Spanish on a phone interview directly from Cancún, Mexico. “It’s not as simple as it sounds. It’s not just about being funny. There are a lot of rules one has to keep in mind, like timing, etc.”

Miramontes, an actor and comedian born in Mexico City, had always been musically inclined since youth, but he wanted to become a serious actor. That’s why he pursued a B.A. in drama at the Instituto Nacional de Bellas Artes (National Institute of Fine Arts).

The multi-talented Miramontes began his professional work in nightclubs. He confessed that in the beginning, not many people enjoyed his comical routines.

“At first, I didn’t make as many people laugh,” he said. “It was a learning experience much like getting a master’s in something. I didn’t care if I didn’t get paid a lot, because for me, it was more important to be able to do it as much as I could so I could get better at it. After that, I was lucky enough to have opportunities on TV.”

Some of those professional opportunities and his growing talents led him to be a part of the cast on the upcoming comedy show “El Tenorio Cómico,” which arrives to Los Angeles on Saturday, Jan. 12 at the Gibson Amphitheatre at Universal CityWalk. The show begins at 8:15 p.m.

“Mexico is known for being big on theatre, and this festival gives us [comedians] a chance to do theatre as well as getting great talent together in one place,” said Miramontes.

“I have wanted to be a part of this for 10 years, and I feel very fortunate to finally be a part of it,” said Miramontes, who noted it’s been a stopping ground for many famous comedians. “For me, it serves as validation. At least in Mexico, it’s a milestone that only the best in comedy reach. It’s been an honor for me to be able to say that I’m part of this festival. It’s not easy. There’s a lot of competition and a lot of talented comedians.”

Now “El Tenorio Cómico” will feature Albertano Santacruz, a character that Miramontes created. Santacruz, a man in his early 30s, is charismatic, flirtatious and joyful. More than anything, however, he’s quite the likeable and comical persona, according to Miramontes.

“Albertano is a character I hold very close to my heart,” said Miramontes. “He’s an unsophisticated simpleton. He’s also very naïve and innocent, which is why I feel audiences love him as well. He’s got a sort of immature charm. He’s a man who hasn’t fully matured yet, but he’s very human and makes the best out of his opportunities, which are very limited. All these things make him a very likable character.”

But how can people in the greater L.A. area be enticed to witness “El Tenorio Cómico” live in person? Miramontes managed to personally opine.

“This festival is the comedy event of the year,” said Miramontes. “We’ve sold out every performance in every city we’ve visited. It’s a great opportunity for Latin people everywhere to enjoy a great comedy show done by very talented and experienced comedians. It’s a non-stop laughing experience and guaranteed to be beneficial to your health.”