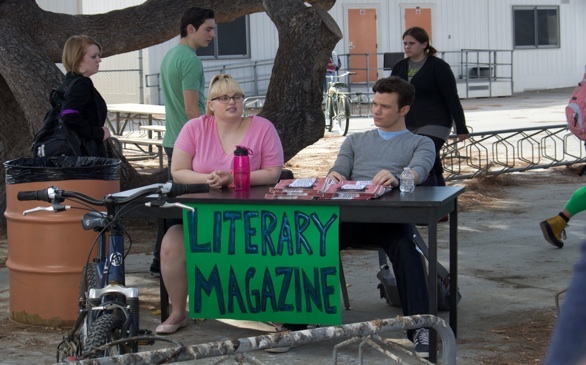 Life is like lightning; it hits you and goes through you fast. Before you know it, it’s over. Chris Colfer’s new movie, Struck by Lightning, explains this idea perfectly.

The film is about an aspiring high school journalist, Carson (Colfer), who tries to make his popular classmates contribute to the school’s literary magazine he created to increase his chances of getting into Northwestern University. However, the only way to do so is by blackmailing them. Meanwhile, he’s dealing with an alcoholic mother and a father who suddenly reappears in his life after abandoning him and his mother years before.

Most probably know Colfer as the stylish, upbeat, slightly flamboyant Kurt on ABC’s hit musical comedy series, “Glee.” But what most people probably don’t know is that Colfer can now add “screenwriter” to his résumé. He wrote the screenplay for Struck by Lightning when he was only 16 years old (he’s now 22), and although it is not autobiographical, it is based on some of his life experiences.

The film starts off with Carson dead after lightning strikes him. Immediately, you know how this film ends before it even begins. However, Carson’s voice comes to life as he narrates his story and explains his regrets and non-regrets.

Although Carson might be slightly resentful, impatient and harsh toward his classmates and mother, you can’t help but sympathize with him.  After all, his parents are divorced, his loving grandmother lost her memory, and his classmates pegged him as a social outcast that doesn’t belong in their student body.  As the film continues, you’ll understand where he’s coming from, and you won’t blame him for using deceptive, evil tactics to get his peers to participate in his literary magazine.

Colfer is an excellent Carson.  He's witty, smart-mouthed, slightly arrogant and bitter with an I’m-better-than-you attitude, which is very different from his character on “Glee.” Colfer's performance is impressive, and he will most likely impress his fans. It seems from this movie and "Glee" that Colfer has "the social outcast" role down perfectly.

However, Carson is not a complete outcast. He has one friend, Malerie, who is played by Rebel Wilson. Wilson is hilarious. She tends to play roles where she’s a little socially awkward and peculiar (do Bridesmaids and Pitch Perfect ring a bell?), and this is exactly what she brings to her role in Struck by Lightning. Expect to laugh or scrunch your eyebrows in confusion by some of the things she’ll say.

The only disappointment in this movie is that you never fully understand why Carson is an outcast amongst his peers. Why did they completely reject him in the first place? One can only speculate...

Overall, Stuck by Lightning is a dark teen movie mixed with comedy and a dry sense of humor. Although many of the scenes and dialogue are very funny in the beginning, it takes a pivotal turn into morbidity and sadness when Carson’s dream suddenly starts to fall apart.

Yet, audiences will walk away with one important message from the film: Don’t be afraid to dream big and live in the moment, because there might be a day when it will all end.

Struck by Lightning will be released in select theaters Jan. 11.