Despite Return of Steve Nash, Lakers Still A Question Mark 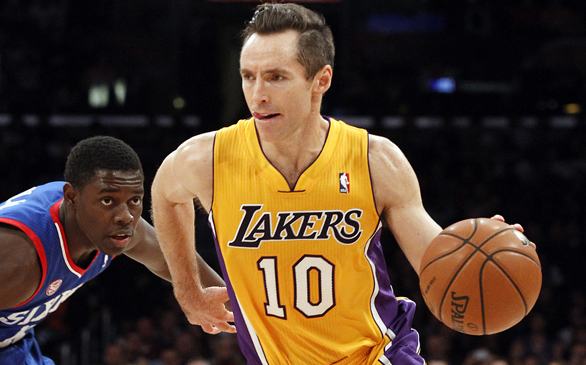 With three months into the season, the Los Angeles Lakers continue to struggle to familiarize themselves with a winning record.

With the surprising additions of Steve Nash and Dwight Howard during the summer, Laker nation had high expectations in winning a championship this year. Later came more surprises during the season when former Lakers head coach, Mike Brown, was fired after starting the season 1-4.

Several days later, the Lakers hired coach Mike D’Antoni, who many saw the move as a surprise after the organization’s management allegedly failed to rehire Phil Jackson.

However, the most outrages surprise Laker fans are still inhaling is the team’s record thus far, which stands at 15-19. Many anticipated the return of Nash – out with an injury for 24 games – to fix the Lakers’ plunge. It was argued that the return of Nash to the lineup would be a great factor in guiding the players and dictating the Laker offense under D’Antoni’s system.

Without Nash in the lineup, the Lakers went (12-12). With him in the lineup, the Lakers are (3-7), and Nash is averaging close to 11 points and 8.8 assists per game. However, despite Nash’s return, the Los Angeles Lakers continue to pray every night for a victory. Clearly, Nash is an offensive weapon since the Laker offense is averaging 103.2 points per game. Thus, this could only leave one thing as the Lakers’ chief problem: their defense.

The team is struggling with the transition defensive, cutting off the lane, reading off screens, boxing out and getting consecutive defensive stops. In the last four games (0-4), the Lakers have given up an average of 56 points in the first half and had 14 turnovers. You cannot help but wonder if the Lakers even practice defense or if D’Antoni mentions the word “defense” to his players. And yet, they arguably have the best defensive player in the league in Howard.

Many were skeptical of the possibility of Howard starting in the Lakers’ opening night game due to his back injury. But after completing rehab and putting in hard work during the off season, he was able to put on a Laker uniform and score 19 points and grab 10 rebounds in his Laker debut. Since then, Howard has put up 20 double doubles and 12 triple doubles in 33 games.

However, Howard’s performance is not enough; the Lakers continue to struggle on the defensive end. Basketball is a collective effort both offensively and defensively, and right now, everyone seems to be struggling to come together and understand his specific role on the team.

Kobe Bryant has said before that chemistry is not an issue; instead, that they are just not playing well as a team.

Even though Bryant became the fifth NBA player to ever reach 30,000 points and Nash reaching the 10,000-assist mark, the Lakers are not doing their best in demonstrating who they are as a franchise.

Throughout the years the Lakers have spoiled the city with championships and historical legends. The possibility of not winning a championship another year is not acceptable. And to make things worst for Lakerland, their losing records is being complemented by what people claim to be the new “reigning” team of L.A. – the Clippers. But that’s a different story.

The Lakers’ inability to win games and figure out a defensive strategy is diminishing their hope of a championship run. Until the Lakers fix their defensive struggles, Laker fans will slowly see winning results.