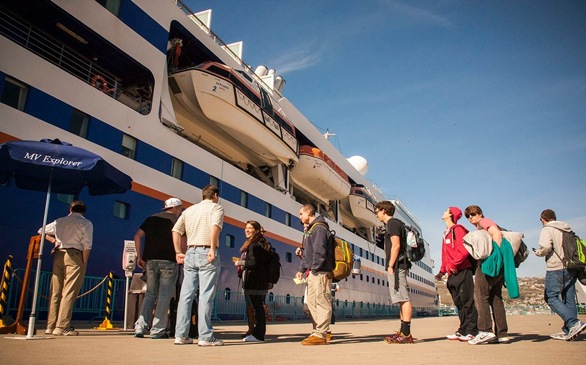 Students walk on board the ship to embark on their 100-day journey across the globe.
(Credit: Facebook.com/SemesteratSea)

Studying abroad is not uncommon for college students. In their junior or senior year, they choose to study a semester in Paris, London, Rome or any other faraway place that tickles their fancy. However, studying abroad on a boat – well, that’s something a little out of the ordinary.

Semester at Sea is a global shipboard study abroad program that visits 14 destinations, including Spain, South Africa, China, India, Japan and more. Currently, college students are on board the Spring 2013 voyage, which has been termed Unreasonable at Sea, until the end of April…but they are not alone.

The Unreasonable at Sea program also has 11 entrepreneurial teams on board, which includes several start-up companies. With the help of 19 mentors, including Megan Smith (the vice president of business development at Google), Jeff Hoffman (founder at Priceline.com) and more, the companies will strive to solve major social and environmental issues in the world by launching on the international stage.

It’s obvious that these 11 companies will benefit tremendously from this study abroad program, but what exactly is in it for the students?

Andrew Quan is a junior at Cal Lutheran University studying business administration, with an emphasis in finance. For him, the Unreasonable at Sea program is an opportunity to find his niche once he graduates college.

“I was trying to find out what I want to do in the future,” said Quan about his process of deciding to join the Unreasonable at Sea program. “I’m hoping this will help me figure it out. Do I want to be an entrepreneur? Do I want to help third world countries?”

Quan hopes the mentors will be an inspiration and that the program will provide a network of friends and ultimately help with what he wants to become, giving him the tools he needs to achieve it.

“I really wanted to go to China, but there’s no opportunity to go to all these countries,” said Quan. “This is not going to happen again.”

Hayley Miller is a junior at the University of Southern California; she is studying communications and cinematic arts. Miller is excited at the opportunity to explore more of the world during the Spring 2013 voyage.

“I go to USC, I'm from Orange County…I just wanted something new and refreshing,” she said. “The opportunity is something I’ll never get again.”

Miller and Quan will both be taking advantage of the fact that they will be around the mentors. Mentor Neal Bauer (co-founder and executive producer of “ER” and the co-founder of “Law & Order: SVU”) is doing exactly what Miller wants to do in the future, and she hopes to get a better understanding of the business world.

“I’m trying to get a sense of how [the mentors’] minds work,” said Miller. “It’ll be a great opportunity to pick their brains on how they started their companies.”

Quan is excited to have the chance to work with George Kembel, the co-founder of Standford and Nobel Peace Prize Laureate, Desmond Tutu.

“It would be cool to see [Kembel],” said Quan. “And [Tutu]...to talk about how he became so successful.”

As Quan, Miller, the other students and the 11 teams make their way across the globe, they will undoubtedly face challenges and rewards. When they return later in the spring, students will hopefully come back to the States cultured, inspired and motivated to start their own business and/or tackle on social and environmental issues.