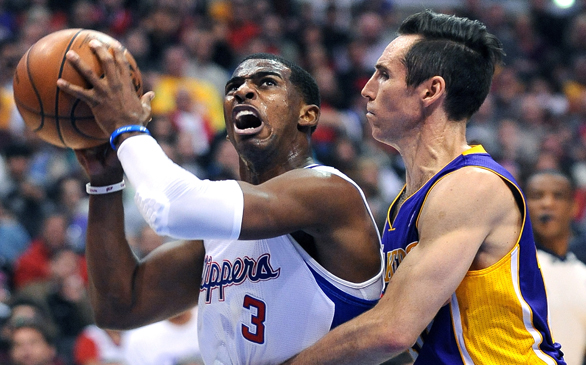 Chris Paul, left, is one of the reasons the Clippers are now the top show in L.A.
(Credit: Wally Skalij/Los Angeles Times/MCT)

Wednesday was just another night to come out and write about greatness and the Los Angeles Clippers. Write that a few years ago and the men in white coats would come and get you.

For the moment, Lakers Showtime gathers cobwebs. The once great and celebrated lost their fifth straight in San Antonio and the separation the two teams are achieving in public perception is becoming startling. That loss, combined with a Clippers victory, had the Clippers leading the Lakers in the Pacific Division by 12 games. Unheard of. Not on anybody's radar. Ever.

Ralph Lawler, who has been doing Clippers play by play for 34 years, describing for the faithful the years of the ugly and the years of the even uglier, has the right word. He calls what is happening now "surreal."

Lamar Odom, who has been a Clipper and a Laker and is now a Clipper again, has the benefit of perspective and the credibility to express it.

"We are the best show in town right now," he says.

Matt Barnes, a career role player in the NBA who is now, on a given night, a star, says simply, "There's a lot of basketball IQ in the room."

Speaking of that, the Clippers played a somewhat lackluster first half. The normal Flying Wallendas were pretty down to earth. No alley oops. Just lots of oops.

They tried to pull away from the Dallas Mavericks, but point guard Darren Collison, a former UCLA star, was making like a combination of Michael Jordan and Usain Bolt, slashing to 17 points in the half.

Then it came time to make a statement, after Dallas had tied it, 50-50, with seconds left. The ball went to Chris Paul, the Rhodes scholar of the basketball IQ to which Barnes referred. Paul squirmed his way to a twisting layup at the buzzer. That halftime 52-50 lead wasn't a big deal. What was a big deal was that it reminded the Mavericks (13-23), and yet another adoring sellout crowd of 19,361 at Staples Center, that they probably would see more of that.

And indeed, they did.

The subject of the "vibe" in Los Angeles these days over the Clippers kept coming up before the game.

It certainly is outdoing Lakers vibe, with obvious reason. Hard to get goose-bumpy over an aging, oft-injured 15-20 team. Lakers play-by-play man John Ireland, to his credit, began Wednesday's broadcast by saying his team was participating in an "incredible mismatch." He meant the San Antonio Spurs are just that much better, even though it turned out they were only three points better in the end.

A couple of spectators at Staples had their own view of the Lakers woes. They flashed a sign that said: "Lakers - will play for food."

You almost have to feel sorry for 710 Radio, the ESPN affiliate station in Los Angeles that paid mightily for the rights to broadcast Lakers games and uses virtually every minute of every show all day to talk about them. Hard to get hordes of listeners for an analysis of a 15-20 team. Part of the pregame broadcast Wednesday night was speculation about the upcoming performances that night of Robert Sacre and Earl Clark.

Actually, in the third period, the Clippers looked as if they could use both, whoever they are.

Collison kept slicing to the basket and a couple of ex-Clippers from the days of cheap wine and few roses, Elton Brand and Chris Kaman, outworked the Clippers front line. Suddenly, the Mavericks had a 10-point lead and L.A.'s main basketball vibe wasn't resonating.

But then, there was that Paul guy. As the clock ran down to end the third period, he weaved and darted around the court until he found what he wanted - Barnes open for a three-pointer that cut the Dallas lead to 75-72.

Suddenly, they were on their feet again at Staples and it felt like a game.

The Clippers never stay dull and listless for long. Behind their little general, they took over again in the fourth. When it counted, Paul zipped and Blake Griffin zapped and Caron Butler saved the 99-93 victory with two time-killing offensive rebounds.

Great teams do that.