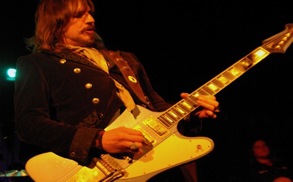 The short and cramped, low-lit stage of The Echo in Silverlake held host to a head-turning act last night.

The Long Beach-based Rival Sons have been making waves with their throwback sound and style. A classically inspired rock ‘n’ roll band from the same vein as Zeppelin or even today’s The Black Keys, Rival Sons have returned to the U.S. after gaining a flurry of momentum abroad.

Last night’s sold-out performance was a big welcome home for the band. But more than that, it was a brief chance for these musicians to prove to the L.A. market that despite the test of time, rock ‘n’ roll, as we have always known it, is far from dead.

Without even so much as a simple introduction, the band plunged into their opener, “Keep on Swinging,” amidst the howling acceptance of a teeming room of anxious locals. With a clean sound and a confident stage presence, all four members jumped into their performance with a focused intensity and a clear mastery of their sound.

Guitarist Scott Holiday and front man Jay Buchanan took lead on the stage, clad in suits that looked like they had been dug up from a Camden Town thrift shop. Assuming the majority of the stage presence for the band, the two took control of the small space allowed to them and delivered an energy that you could feel from the back of the room. Bassist Robin Everhart and drummer Michael Miley held down the rhythm section. Carefully keeping time, they displayed a certain level of professionalism as they added showmanship only when necessary.

Buchanan no doubt stole the show. He is something from another time. His style is reminiscent of a poised cross between Janis Joplin and Robert Plant. With a calculated sense of energy, he exploded from behind his mic stand, whipping his hair and dancing like a rock ‘n’ roll junkie straight from the ‘70s.

His energy was focused and internal. He didn’t interact with the crowd well, which on one hand, turned out to be a major disappointment for a lot of dedicated fans in this intimate venue. On the other, Buchanan’s focused aura is a classic persona that in many ways embodies the spirit of rock ‘n’ roll.

All other members of the group follow suit with an apparent mantra of “just shut up and play.” It’s a humble approach, indicative of a band that is truly in this for the music. However, the lack of significant audience interaction, even if it does seem like pandering, makes for a show that can accidentally slip into monotony.

Musically, the show was exceptionally solid. All four members are extremely talented musicians who understand their individual roles and know how to execute. The whole thing was smooth, yet raucous, right up until the very end when things seemed to fall apart.

Leading into the band’s encore, Buchanan was the only member to vacate the stage. Everhart, Miley and Holiday lingered by their instruments or took pictures of the crowd while anxious fans shouted for “10 more songs.”

With a distinct feeling of routine, Holiday slowly shrugged his guitar back onto his shoulders after what seemed like a 90-second break in the music. The three musicians casually slunked back to their instruments, and Buchanan came running back from the green room to jump in on the band’s last two songs of the night: “Pressure and Time,” and “I Want More.”

The two songs in their encore ended Rival Sons’ set on a strong note. The show probably should have ended there, but it didn’t. Buchanan, again, quickly ran off stage and ducked back into the green room, while the other three musicians remained on stage.

This departure led to a drum solo by Miley, which was poorly placed at the end of the set. Miley is an incredibly talented drummer, with an arsenal of stick tricks and a distinct understanding of dynamic and form. But any drummer that is faced with a solo at the end of their set is going to be exhausted. Miley is no different, and his solo turned out sloppy, despite that fact that we all knew that he could do better. He was just, understandably, tired.

Miley then handed off the stage to Holiday who wished Jimmy Page a happy birthday before ripping into a short, cohesive solo. As Holiday’s short solo wound down, Everhart started plucking the tune of Zepplin’s “Dazed and Confused.” Holiday and Miley both caught on, and the three players broke into an instrumental cover of the song.

The three jammed for a few minutes before the music slowly broke down, and the stage slowly vacated in a manner that was anti-climactic at best. It was an unfitting ending for such a strong show and no doubt a slight disappointment for the sold-out venue of enthusiastic fans that had come out of the woodwork to see them.

Rival Sons really has something unique going for them. A solid rock ‘n’ roll band like this, with a fresh sound and a classic feel, is exactly what today’s oversaturated, auto-tuned music industry needs. They’re an old school breath of fresh air. Rival Sons have a strong following, an already impressive resume and the world ahead of them in terms of how far they can take this project. There are just a few major holes in their live show that seriously need to be addressed before they can really live up to their potential.