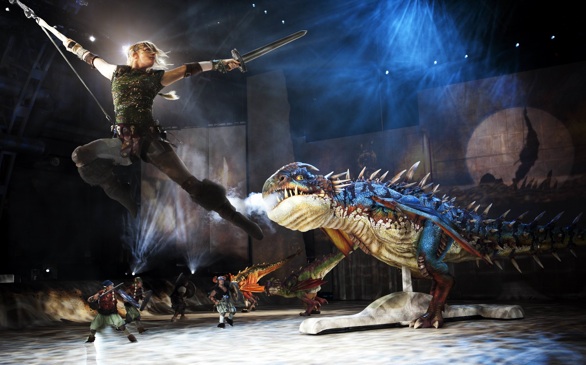 “How To Train Your Dragon Live Spectacular” is a heavy show, literally. There are 30 x 18 wheeler trucks and many busses filled with 85 cast and crewmembers. However, this show is not like the circus, the ice capades or any other children's show before it. It's what happens when the movies come to real life. It's what happens when you take some of the most creative minds in animation from DreamWorks Animation—those folks who are used to creating the impossible – and tell them they have access to state-of-the-art animatronics and a huge stadium to tell a story.

DreamWorks has a certain sensibility for telling stories with heart. This story is based on the film How to Train Your Dragon and is about a young, scrawny Viking teenager named Hiccup who doesn’t fit his tribe’s longstanding line of heroic dragon slayers. He befriends an injured dragon named Toothless, and together they develop a friendship and save the Viking and dragon worlds. On stage, the dragons are larger than life thanks to the help of Global Creatures, the masterminds behind the international phenomenon “Walking with Dinosaurs.”

These automated dragons have roles in the show, but they are part of a broader story with a dynamic cast of 20 actors. Not to mention, the show requires engineers to pull off this spectacle that has more than a dozen dragons (some with wingspans of up to 46 feet), Viking warriors (who are world-class circus artists and acrobats) and an international cast, including Riley Miner and Rarmian Newton (an award-winning actor from “Billy Elliot The Musical”) as Hiccup. Gemma Nguyen, a third degree black belt and six-time world champion in Tae Kwon Do, plays Hiccup's female friend, Astrid.

This creative team was given 20,000 square feet of surface to play with. The stadium show makes it an immersive experience; it is far from a traditional Broadway show. In fact, it is similar to DreamWorks’ stage versions of Shrek and Madagascar.

DreamWorks Animation’s head of live entertainment, Eric Stevens, said the creators see the stadium as "a huge sound stage like we use for films.”

“There is a huge backdrop for video landscapes the size of nine movie screens combined...sound and lighting effects, as well as an air space for acrobatics,” said Stevens. “The mountains, forests, oceans help the audience exist within the story's environment." Even though it is in a huge venue, there are still "thousands of people focusing in on an intimate story moment."

The show has been touring in Australia, New Zealand and North America for more a year. If all goes well, it will one day find a permanent home—maybe even a Las Vegas venue if the city decides to stay family friendly.

At this point in time, it is a show you have to see to believe, and it's something you don't want to miss.

“How to Train Your Dragon Live Spectacular” will have shows at the Honda Center in Anaheim, Calif. from Jan. 17 to Jan. 20. For more information, visit www.dreamworksdragonslive.