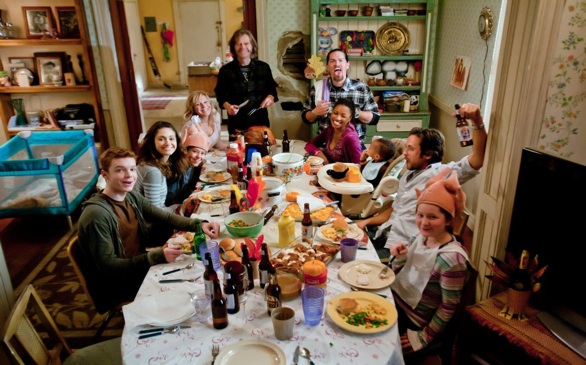 For those who watched the first season of the hit new Showtime series “Shameless,” the antics of the Gallagher family in Season 2 comes as no surprise. However, there is such a thing as overdoing it, and “Shameless”: Season 2 really walks the line.

“Shameless” is about a Chicagoan single dad, Frank Gallagher (William H. Macy), and his six kids. They are a somewhat dysfunctional family, with Frank frequently at the bar and passing out on floors and his children getting into extreme, unappealing life-changing situations. But this family dynamic is interesting and captivating, making “Shameless” an overall great show.

Many may not know that “Shameless” is actually a remake of a British television series of the same name. In fact, the series starred a young James McAvoy, who went on to star in films like Atonement, Wanted and X-Men: First Class. The original series had a core group of fans that were somewhat skeptical of the American remake. It’s difficult to capture the essence of an original in a remake, and that’s what causes many of them to fall flat.

However, the American version of “Shameless” is one of the few exceptions that did it better than the original. It’s gritty, fun, and it has some great acting from seasoned vets and newcomers alike. Not only that, Showtime was apparently pleased with the show as well, renewing it for a second and third season. Everything was moving along wonderfully in the first season. It was hilarious, fast-paced, suspenseful, and it never sacrificed character development for comedic moments.

The second season is a different story. It seems that perhaps the writers were trying to one-up the crazy things that happened in the first season to keep people interested. Right off the bat, Frank loses his youngest child Liam in a strange and entirely unnecessary bet at the bar he frequents. From that point on, the series takes a million strange twists and turns that were interesting, but felt strange and unnatural.

While Frank is off doing whatever he can to squeeze a penny out of less-fortunate people (like the dying woman he lives off of and helps to kill), Fiona (Emmy Rossum) and the Gallagher clan are still doing whatever it takes to survive. Unfortunately, the return of Frank’s mother makes it a bit more difficult for them to succeed. She is released from prison and enlists Frank and some of the children in a scheme to get money (including a meth lab, which 10-year-old Carl is happy to help with).

Meanwhile, Fiona is thrown for a loop when her now ex-boyfriend Steve (a.k.a. Jimmy) comes back into town. At lunch, he not so subtly breaks the news that he’s married the daughter of a Brazilian drug-lord.  To add more pressure to Fiona’s struggles, Lip’s (the smartest and second Gallagher child) sort-of girlfriend Karen is now pregnant. In a move that makes little sense to anyone but him, Lip drops out of high school in order to get a job and care for the child.

After several more episodes of interesting character choices and events, Monica (the Gallagher kids’ mother) comes back home. She has broken up with her girlfriend from Season 1, and she is ready to be a mother again. However, things go a little awry when she steals the family’s “squirrel fund,” which is the money they’ve been saving in a Crisco can in the cabinet to get them through the winter.

Monica, though good intentioned, is an awful mother, and Frank doesn’t help at all. In fact, Frank makes everything worse for the bipolar mother of six, and Monica does something that may have scarred her children’s minds forever.

The last four episodes of Season 2 are the best of the lot. When the show drops the antics and gets back to what made the first season great, it really shines. The struggling family dynamic is what makes “Shameless” such a great show.

In terms of acting, “Shameless” is top-notch. With people like Macy and Joan Cusack (who plays Sheila, the neighborhood kook), how could it not be? And though it may surprise some, Rossum is actually the standout of the entire series. Her ability to play the strong, hardheaded Fiona and still remain vulnerable is truly outstanding.

Overall, Season 1 fans will enjoy “Shameless”: Season 2. It’s not quite as good as the first outing, but it's still a satisfactory addition to a wonderful show.

“Shameless”: Season 2 is available now on Blu-ray and DVD. Catch Season 3 of “Shameless” every Sunday night on Showtime.