Ester Dean Stepping Into the Spotlight 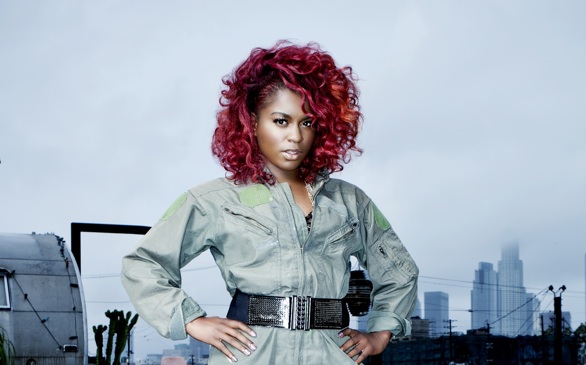 The name, Ester Dean, may not sound as recognizable as Katy Perry or Rihanna, but as the writer behind some of their biggest songs, she’s in high demand.

Dean wrote Perry’s “Firework,” "Rihanna’s “Where Have You Been” and “Rude Boy,” and she has written for Beyoncé, Britney Spears and Christina Aguilera. But labeling Dean as only a songwriter would be an insult to her talents.

Any job requiring a microphone is a title on her lengthy resume, which includes singer, music producer, actor and voiceover actor. Recent projects she has worked on include Rio, Pitch Perfect and Ice Age: Continental Drift.

In an interview with Campus Circle, Dean talked about new projects, her real opinion on celebrities she’s worked with and so much more.

Campus Circle: What can our readers expect from you in 2013?
Ester Dean: Last year happened to be a slow time, because I decided to take some time out to do acting. [From that] I experienced growth and strength within myself and realized I could do whatever I want. I’ve added more under my umbrella. I started my own production company. I’ve taken control of everything that is Ester Dean, and I am the master of me now. I’m flying on my own, knowing that I’ve been taught well by Jimmy Iovine, Polow da Don and [others who] taught me how this industry works.

CC: How do you know when you write a song if it’s for you to record or for someone else to record?
ED: It’s easy because I have to record it anyway. They’re all mine. I call it schizophrenic writing. I did a song for Lloyd called, “Lay It Down.” I played Lloyd and Patti LaBelle. I sung back and forth to myself. Then I recorded one being Lloyd and R. Kelly, then R. Kelly and a girl. It’s creating multiple personalities that allow the writing. When I look at a song, I ask myself is that the personality you want to portray.

CC: You’ve released two singles: “I Can’t Make You Love Me” and “Baby Making Love.” What is the album’s release date?
ED: I’m giving away free music. I’m not looking for my fans to buy a song. I just want to give it to them, and it doesn’t matter if I don’t put out an album.

CC: You sing, you write music, you produce, you act, and you do voiceovers. Do you enjoy doing one over the others?
ED: I love to do it all. I’m a fan of microphones. Anytime I sing into the microphone, there is no pressure. I’m there and [my voice] comes back in a way that I can hear myself. When you do voiceovers, that’s you in the booth again. When you’re writing songs, you’re in a booth. When you’re singing, you’re in a booth. I want to stay in the studio. I hate Sundays and Saturdays, because people aren’t working.

CC: What does your average workday look like?
ED: If I could work all day I would, but I take a break. I get on the phone, have some meetings and do the whole political part of the industry. I stay in the studio until five in the morning. I’ve been doing this same routine since I was 15.

CC: The people who you have written songs for is impressive: Beyoncé, Christina Aguilera, Katy Perry, Nicki Minaj, Rihanna and Britney Spears. Who was the easiest to work with?
ED: Robin Thicke and Chris Brown. Chris and I would go to the microphone and scream. And Rihanna because she was never there; she’s not a hoverer. She knows how to stay out of creative people’s space, just as much as people stay out of her creative space. A lot of artists will hover over you and if they don’t, their A&R will.

CC: Who was the most difficult to work with?
ED: I think anyone who has ever been difficult, that I’ve worked with, is not famous anymore. I say that to say people who are difficult tend to not last. They don’t understand that this is a business.

CC: What artist have you not worked with that you would like to?
ED: Pink, Celine Dion, Lil Wayne, Drake, Kendrick Lamar and Lady Antebellum.

CC: 2012 had some huge music stories, one being Mariah Carey and Nicki Minaj joining “American Idol” and not getting along. You co-wrote “Super Bass”and have worked on about nine projects with Nicki. What is it like working with her?
ED: I call her all the time. I think she’s awesome. I haven’t worked with Mariah, but I hear she’s awesome. I think a story is a story. You never know what it transpired out of.

CC: Another big story was Frank Ocean’s coming out. How did you feel about that?
ED: I love him. I think his music is awesome. Him coming out has nothing to do with his music. The music is amazing. I think more people should be as free as he was.

CC: Do you think that the R&B/hip-hop community is ready to embrace an out and proud artist?
ED: I think they should. Let’s not go back 100 years or 10 years ago. Let people live their life, but that has nothing to do with hip-hop or R&B. [Frank Ocean] writes great songs. You can relate to them. If you’re talking about same-sex or something else, you’re talking about love. Love is love. If you can’t relate because you think he’s talking about [a man], then f#ck it.

Ester Dean's debut EP is expected to release later in 2013.