At USC, Violinist Midori is a Virtuoso Professor 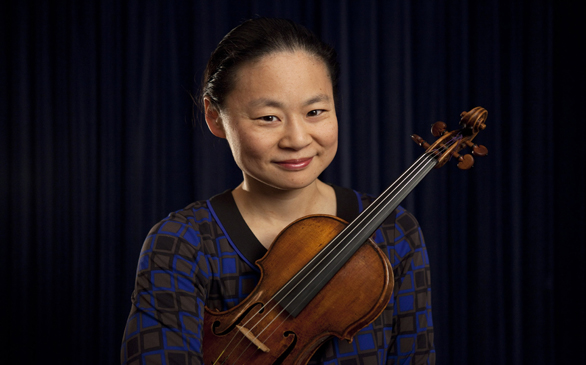 Since she made her solo debut at age 11 in 1982, violinist Midori has grown up - and grown middle-aged - under the full glare of the media.

Reporters dubbed her a child prodigy when she first stunned audiences as a last-minute substitute with the New York Philharmonic. They chronicled her ascent to adolescent superstardom, a status cemented when, at age 14, she went through three violins in a single Tanglewood concert. The media continued to follow her as she matured into a venerated soloist.

The latest chapter in the Midori saga is perhaps the least flashy but may be the most unexpected. It could simply be titled "Midori, Angeleno."

Six years ago, the Japan-born violinist picked up and left New York, the city where she grew up, and settled in Los Angeles, the city she now calls home.

For musicians of her fame and caliber, "home" is often just a glorified layover in between international flights. For Midori, however, L.A. has come to mean much more than that.

In 2004, Midori was named a professor at the University of Southern California's Thornton School of Music. After a period of bicoastal commuting, she settled full time in L.A in 2006. She was promoted to the head of the strings department the following year.

"I have to say it was so unthinkable for such a long time to move out of New York," she recalled in a recent interview at her USC office. Midori, dressed in a simple white shirt and a long skirt, with her hair in a French braid, was fighting a persistent cough but was otherwise in good spirits.

"More than anything else, people identify me as someone from New York. But I'm very happy here. So much of it is tied to this job, and I'm very happy in this job."

The L.A. chapter of Midori's fascinating, complicated life has seen the violinist transform herself into a full-fledged academic. Among her students, she is known rather formally as Professor Goto. (Her full name is Midori Goto.) Her USC title - the Jascha Heifetz Endowed chair in violin - sounds exalted, but much of her time is given over to administrative duties, ranging from admissions to budgetary matters.

She even takes care of the occasional student disciplinary problem. In the same evening as the interview, she had to inform a student that she was failing her courses. (That meeting was off-limits to a journalist.)

"I like to know what's going on with students. I have to stay involved," Midori said.

The concert side of her career - what "60 Minutes" correspondent Morley Safer described in a 1992 profile as "a road trip without end" - is nowhere near as grueling as it was during her teenage years. But she continues to perform regularly, with more than 70 concerts and recitals last year alone.

On Friday, Midori will debut a new concerto written for her by Hungarian composer Peter Eotvos, titled "DoReMi." The concert with the Los Angeles Philharmonic at Walt Disney Concert Hall repeats Saturday and Jan. 20.

Midori has been practicing the Eotvos concerto on and off for several weeks. "I'm having a great time learning it," she said. The piece "has me playing quite often in the high registers, so yes, it's challenging. Is it unplayable? No. It's very idiomatic."

Midori also will perform the piece later this year at the BBC Proms and with the Leipzig Gewandhaus Orchestra, both of which co-commissioned the work with the L.A. Philharmonic.

Midori said she personally chose Eotvos to write the piece after he was recommended by conductor Christoph Eschenbach, a close friend. "I take anything he suggests very seriously," she said.

Her peers describe Midori as an ideal fusion of an instinctual musician and intellectual.

Dicterow will become a USC colleague when he joins the faculty in the fall. He said Midori attended a master class he gave on campus, recalling that she arrived straight from the airport after a long flight from Europe. "That's the way she is. She has a lot of energy."

It can be difficult to believe that Midori is already 41. At the same time, this former wunderkind has been famous for so long, it's hard to believe she's only 41.

Still petite, she could easily be confused for a college student. But in terms of temperament, Midori has shed most traces of the woman-child "moppet" that her harsher critics called her during her youth.

If anything, Midori gives off the focused intensity of a mid-career workaholic who is wedded to her job. Her days usually begin at 6 a.m., which is not the hour she arises but the time she gets into her office at USC. She's usually still going well past midnight.

"Sometimes, I sleep a couple hours, and do some work, and then go back to bed," she said.

Midori said she practices four to six hours a day. "If I do less than four, the violin starts to get a little bit jealous," she said.

Most semesters, Midori spends a significant time away from campus on concert tours around the world. Her colleagues say that she makes every effort to fly back to L.A. in between concerts, even if it's just for a few days, and that she gets work done through email.

Midori lived in Santa Monica for a period after moving from New York. But four years ago, "I decided to go green and got rid of my car." She now lives five minutes by foot from her office on campus.

Robert Cutietta, dean of the Thornton School, said Midori was initially hesitant about taking the job at USC.

"For two years, we kept approaching it and walking away from it," he recalled in a phone interview. "She was concerned about living in L.A. and balancing the job with her career. I didn't think she would say yes."

But Midori did say yes, and in the years since moving to L.A., she appears to have found a kind of career equilibrium. "I think she enjoys having the responsibility," said cellist Ralph Kirshbaum, also a professor at USC.

Even when she's on concert tours, "we're quite used to getting emails from her."

In person, Midori is talkative and amiable, but there are parts of her life that she clearly doesn't like to discuss. A question about the "child prodigy" label elicited a curt response: "I don't think much about it."

For this interview, she declined to open up about her private life except to say that she lives by herself.

"People are especially curious because I don't talk about it," she said.

Her reticence might have something to do with lingering public interest in the turbulent years in her 20s, when she battled anorexia and depression, resulting in a number of hospital stays.

Her personal difficulties were not made public at the time, but she later recounted them in her 2004 memoir, "Simply Midori," which has been published in German but not in English.

After recovering, she pursued a life outside music, studying psychology and gender studies at New York University. Her master's thesis was tellingly about pain research.

"All pain is subjective. It's how you perceive it," she said.

Midori eventually returned to the stage and took a teaching position at the Manhattan School of Music in 2001. She said moving to L.A. has provided her with a "new adventure" at this point in her career.

"I love my students - they motivate me," she said.

Each academic year, Midori teaches several USC undergraduates and graduates who receive private instruction on a weekly basis. Her teaching style, as with most everything else about her, is high energy -she interrupts often and paces the room. Her criticisms are often delivered with a smile.

Not many details escape her attention. In one lesson, she reminds a student that vibrato must continue after a note ends. She tells another student to stop grinding his teeth when he plays.

Her role as professor doesn't end at the campus border. On one recent December evening, she performed with three of her students at a treatment facility for ex-convicts and recovering drug addicts near downtown L.A. The informal recital is part of Midori's annual holiday tradition of performing at local correctional and mental health facilities.

She doesn't publicize these recitals, and she asked that the names of the institutions not be disclosed and declined to have a photographer came along.

Midori performed first that evening, playing a Bach Partita. The audience, all men, listened without interruption. Some captured her performance on their mobile phones. She and her students visited five local institutions this holiday season, including psychiatric hospitals.

"Just because you offer free concerts doesn't mean people will be eagerly welcoming you," she said. "I'm just appreciative that they're accepting us."

Midori still devotes a significant portion of her time to her three nonprofit organizations, all of which bring music to disadvantaged students or to impoverished areas of the world. In December, she spent a week traveling around Bangladesh as part of a quartet.

Her sense of social responsibility extends to the most seemingly trivial details, such as reminding her students to turn off lights when they leave a room to conserve energy.

Midori already has her eyes on a new commissioned piece for 2014, but she could not discuss it. During the next two months, she is scheduled to perform in Germany, Britain and Spain.

In between, she will return to L.A. for work and because, as Midori simply puts it, "it's where I live now."