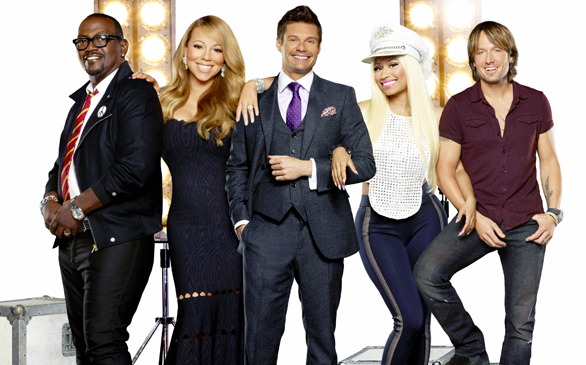 "American Idol's" 12th season debuts this week with a new panel of judges - and the growing perception that the show is no longer relevant.

The singing competition lost nearly a quarter of its viewers last year, falling below 20 million for the first time since 2003. There was also a drop in that coveted 18 to 49 demographic. Undoubtedly, some of that audience ended up in the arms of competitors "America's Got Talent," "The Voice" and former "Idol" judge Simon Cowell's U.S. edition of "The X Factor."

The hope going into this season of "Idol"? That the tension between sharp-tongued rapper Nicki Minaj and glitzy pop diva Mariah Carey will provide a ratings boon.

But with so much attention on the judges, many don't realize that "Idol" remains a solo player in the star-making department. Show alumni have sold more than 200 million records and notched 371 No. 1's on the Billboard charts. They've also won Grammys, an Oscar, done Broadway, starred on prime time TV and even judged on competing shows.

Considering the success of past contestants such as Kelly Clarkson, Carrie Underwood, Chris Daughtry, Fantasia, Adam Lambert and Jennifer Hudson, it makes sense that this season's slogan is "Everyone dreams. 'Idol' delivers."

Minaj, who admits she was wary of joining the judges' panel, couldn't ignore the show's massive reach.

"Even up until the last day up I had to sign the contract I was still not 100 percent sold because I feel like the 'American Idol' brand is so big that you can't do it unless you commit fully," she said recently at the Television Critics Assn. press tour in Pasadena. "I'm never gonna get the opportunity to be a part of something this big and something that reaches middle America and I felt like I didn't have anything to lose."

"It was a show that I had watched since the first season, it's a credible show," she continued. "It's really going to create a superstar and I wanted to be a part of that."

The show's ability to make its contestants into household names was bolstered when "Idol" creator Simon Fuller's 19 Recordings, which manages the finalists and winners, joined up with Universal Music Group in 2010. The move introduced Jimmy Iovine, chairman of Interscope Geffen A&M, as an in-house "Idol" mentor. But more importantly, Iovine's expertise at breaking artists such as Lady Gaga and Eminem was now being used on the show's novice singers.

The first "Idol" winner to have an Interscope release, Season 10's Scotty McCreery, sold 1.2 million copies of his debut, "Clear as Day," according to Nielsen Soundscan. In comparison, his predecessor Lee DeWyze managed just 151,000 with his post-"Idol" offering back when winners were signed to RCA.

Despite critics shrugging Phillip Phillips' win last year as just the latest "white guy with a guitar" to win - a trend that's dominated the show for the last five seasons - he set a sales record with his "Idol" coronation song, "Home," having sold more than 3 million copies thanks to its placement at the 2012 Summer Olympics.

While Phillips continues to settle into his post-"Idol" career, viewers have yet to see debut albums, or even hit singles, from last season winners of "The Voice" or "X Factor," more than a year after the shows wrapped and crowned additional champions. Both shows will also have new judges for their next season.

As for "Idol's" new panel, the press has focused widely on a reported feud between Minaj and Carey, which exploded when video of a heated, expletive-laced argument hit the Internet in October.

"This is a very passionate panel," said Carey, who called her spat with Minaj an unfair distraction. "The fighting is what it is, but this is 'American Idol.' It's bigger than all that. It's bigger than some stupid trumped-up thing, I think it's about the next huge superstar that will come from this show."

Carey helps close a gap that "Idol" has long struggled with - getting a true vocal talent in to critique the aspiring talent. Along with Minaj and country music statesman Keith Urban, the new lineup can now compete with "The Voice's" set of credible and relevant judges.

"We were listening to what the audience was telling us," said Trish Kinane, executive producer. "One of the things they told us was that on the judges' panel they wanted people who were experts in their own right, had a talent and a right to be here. With a lot of these shows now it's a crowded marketplace. They are looking for honesty from the panel."

It remains uncertain if "Idol" will win back its place as the most watched show on television, and while producers certainly want some of that glory back, one thing they aren't concerned about are the competitors sniffing their tail.

"Yes, there are too many of these shows on the air, and they are taking each other down a little bit, but this is still the king of the shows," said Mike Darnell, president of alternative entertainment at Fox. "This is the one, and only one, that makes stars. Period."